Passover Starts Monday -- How about Celebrating at a Great NYC Restaurant? 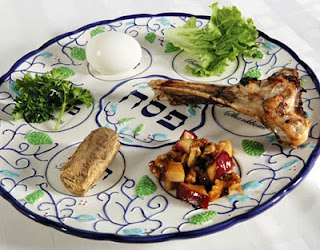 Foodies can still get their "fix" on Passover -- some great Manhattan chefs are hosting Seders on the first two nights, March 29 and 30. These and others also have Passover menus all week long. And, it's perfect if you're looking for a gluten-free dinner -- no bread is allowed on Passover.

Capsouto Frères: Sephardic Seders have been held at this lovely French bistro for 23 years (non Kosher). On the first two nights of the holiday, Seders will be led by a Cantor with a reading of the Haggadah. Popular dishes have included frittatas, poached salmon, and matzo mina (layers of matzo and cheese) served with Israeli wine selections. The dinner is $150/person, payable in advance, and benefits the American Jewish Joint Distribution Committee, a Jewish worldwide charity organization. 451 Washington Street, 212-966-4900

Savoy: Join Savoy’s Executive Chef-Owner Peter Hoffman as he leads a Sephardic Seder (non Kosher) on both March 29 and March 30 with a menu featuring the cuisine of the Jews of Central Asia (Uzbekistan, Georgia, and Persia). The Seder will include a thirty-minute non-religious reading from the Haggadah. Menu highlights include fried trout with garlic and coriander sauce; beet and turnip soup with cumin and mint; chicken with rice, barberries, and coriander; and chocolate cake with walnut and cardamom. The dinner is $95/person and includes wine. Tax and gratuity are additional. (First seating- 6pm Second seating-6:45pm). 70 Prince Street, 212-219-8570

Tabla: Ever wonder what an Indian-themed Passover Seder would be like? If so, head to Tabla for its fifth annual “Unleavened Bread Bar” on March 30. The evening starts at 6pm, and a Passover service will be held. Enjoy matzo ball soup with toasted coriander, banana leaf wrapped fish patties, and other exotic Passover selections. The dinner is $95/person and $50/child under 10 years old. 11 Madison Avenue, 212-889-0667, www.tablany.com

Talia’s Steakhouse & Bar: For the ultimate Glatt Kosher Seder experience, Talia’s is the place. A Seder will be led by a Rabbi or guests may choose to hold their own Seder separately for those at their table. Celebrate at Talia’s on March 29 and March 30 at 8pm with holiday favorites such as Matzo ball soup, pan seared Atlantic salmon, stuffed Cornish hen, and brisket. The dinner is $100/adult and $65/child under 10 years old. 668 Amsterdam Avenue, 212-580-3770

Henry’s: Head to this Upper West Side bistro for a traditional three-course Passover Seder dinner. The Chef will prepare a Seder plate along with favorites such as matzo ball soup, braised lamb shank, and a roast half chicken with red quinoa, wild mushrooms, roast potato, and poached garlic. Dessert is delicious ginger-poached figs with cinnamon gelato and walnut cream. The dinner is $39/adult and $22/child under 15 years old. 2745 Broadway, 212-866-0600

For other restaurants without a Seder but with great Passover menus: