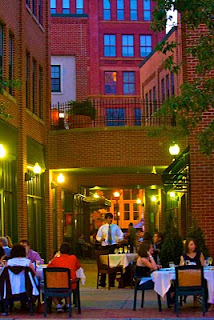 After spending three and a half years in Ithaca at Cornell, I became a huge fan of the town of Syracuse. I would never knock Ithaca, as it is incredibly gorgeous, but I needed to find better shopping than at Ithaca’s Pyramid Mall, now more romantically named The Shops at Ithaca Mall. My search led me one hour north to Syracuse, to two of my best finds while at Cornell:—the enormous Carousel Center shopping mall and Dinosaur BBQ, home to the most succulent ribs I’ve ever tasted (and happily now in NYC too).

It’s no surprise that I was very excited to learn about Syracuse’s “1 for 1 Orange Special,” celebrating March Madness and SU Orange’s number one seed in the NCAA Basketball Tournament. This year marks the first time the Orange has achieved that position since 1980, and Syracuse wants locals and visitors alike to celebrate with $1 specials at neighborhood favorites. Highlights include a 750 ml bottle of wine from Lakeland Winery for $1, a third night rate of $1 at featured hotels such as the Jefferson Clinton Hotel (member of Historic Hotels of America), $1 espresso shots at Sugarpearl Café http://www.sugarpearl.org/, $1 admission for the show Almost Maine on May 23 at the Syracuse Stage http://www.syracusestage.org/, and more.

For the complete list of specials, visit http://www.visitsyracuse.org/alltheway. Specials will run until the Syracuse Orange either lose a game or win the NCAA basketball tournament. Go Orange! I will be cheering for you until you take on my Big Red on April 13 for the annual lacrosse showdown.
Email Post
Labels: Big Red Cornell Historic Hotels of America Ithaca Jefferson Clinton Hotel Lakeland Winery March Madness NCAA SU Orange Syracuse Syracuse Orange Syracuse Stage Visit Syracuse