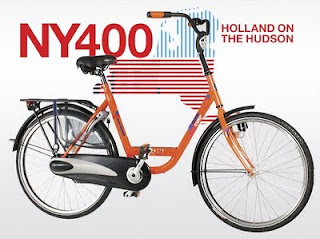 Experience everything Dutch—cuisine, culture, architecture, arts and more—during NY400 Week. Commemorating the 400th anniversary of Henry Hudson's arrival in New York Harbor, NY400 Week is the weeklong, citywide celebration of 400 years of friendship between New York City and the Kingdom of the Netherlands.

Visit a Dutch village, rent a bike for free, take in a sailing race, dance against the backdrop of the Manhattan skyline and more. The week culminates on Sunday, September 13, with NY Harbor Day, which promises even more celebrations on land and water, along six scenic waterfront sites easily accessible by bike, subway, foot, ferry and water taxi.

Below are some of the week's highlights.

NY400 Welcoming Ceremony
(Tuesday, September 8, 8:30am)
Intrepid Sea, Air & Space Museum
Join the kick-off event for NY400 Week at 9:15am on the Hudson River. Expect a parade of US and Dutch frigates, NATO ally fleets, Flying Dutchman racers and replicas of historic Dutch ships to fill the harbor in honor of the 400th anniversary of Henry Hudson's voyage to New York. A 21-gun salute and the Marine Band of the Royal Netherlands Navy will provide on-shore accompaniment to the official ceremony from the USS Intrepid. All are welcome to enjoy this free event.

Bike NYC on a Free Dutch Bike
(Tuesday, September 8–Saturday, September 12, 11am–7pm)
Bowling Green (Broadway at Beaver St.)
Remember the bikes you saw during Summer Streets in August? Those bright orange NY400 bicycles will be available free to the public on a limited basis during the course of NY400 Week. Get around town the typical Dutch way, and be sure to ride your Dutch bike to NY400 Week events.

Replica of the Half Moon
(Wednesday, September 9, 11am–3pm)
The Battery
Every year, this replica of Henry Hudson's Halve Maen retraces the ship's original 1609 voyage—which laid the foundation for the New Netherland colony and modern-day New York City. Come see the ship's exterior and meet its captain and crew.

Replica of the Onrust
(Wednesday, September 9–Sunday, September 13, 10am–5pm)
Pier 84, Hudson River Park
The Onrust was the first trading and exploration vessel the Dutch built in America, constructed in 1614 by Captain Adriaen Block and his crew after their original ship burned. Volunteers will demonstrate how the crew survived by using local resources, shipbuilding skills and productive working relationships with Native Americans.

Arrival of the Fleet of Traditional Dutch Barges
(Thursday, September 10–Sunday, September 13)
Yankee Pier, Governors Island
Seventeen leeboard vessels—not much different from the ones Henry Hudson and his crew used to explore New York Harbor—arrive at Yankee Pier on Governors Island. Be on hand for the welcome ceremony, set to begin in the late afternoon (visit ny400.org for more details). Captains and crew are on hand to answer your questions about these historic ships. The boats will be at the pier through Harbor Day.

Vermeer's Masterpiece: "The Milkmaid"
(Thursday, September 10–Sunday, November 29; closed Mondays except October 12)
The Metropolitan Museum of Art
In honor of NY400, Amsterdam's Rijksmuseum has loaned Vermeer's most admired work—The Milkmaid—to the Metropolitan Museum of Art. This is the first time the painting has been in the United States since the 1939 New York World's Fair. Several other paintings by Vermeer and fellow Dutch masters round out the exhibition.