Renting an Apartment in Paris (Instead of a Hotel): Why You Should or Shouldn't 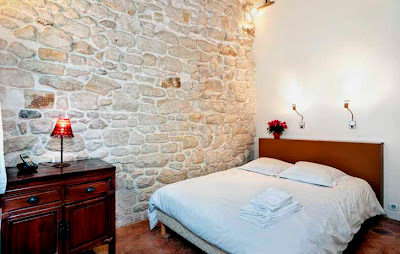 I've often thought about taking a month off and renting an apartment in Paris or a farmhouse in Tuscany instead of booking a traditional five-star or four-star hotel.


Here, Travel and Food Notes welcomes guest blogger Peter Hochstein, author, biographer, ghostwriter, journalist and award-winning advertising copywriter, who captures the often-hilarious essence of doing just this. You can learn more about him at www.PeterHochstein.com.

Alas, the Parisian concierge, like the Aberdare Mole Shrew and the Santa Cruz Dwarf Frog, is an endangered species. I’m not talking about those sharp-looking, ever-helpful folks wearing crossed keys on their lapels ­– the ones behind the concierge desks at Parisian four-star hotels like the Lutetia and five-star hostelries such as the Ritz. Instead, I’m talking about women of a certain age and often more than a trifle on the cranky side. They usually sit with a pet dog or cat in a booth or behind a window inside the entrance to French apartment buildings, keeping a suspicious eye on who comes and who goes. The concierge may have other duties, too, such as light cleaning of the stairways and halls. But make no mistake: espionage against her building’s visitors, as well as projecting a generally negative ethos, is key to what she does. The encroachments of civilization have been killing off those endangered mole shrews and dwarf frogs. It’s the same with Parisian concierges. Increasingly they find their métiers getting encroached on by intercom systems. But if you’re lucky and hurry up, you may still be able to rent – often at bargain prices compared to the price of a hotel room – a Paris apartment that comes with the last of a once-ubiquitous Parisian breed. Until now you may only have experienced her type in Muriel Barbary’s novel, “The Elegance of the Hedge Hog.”

I’ve rented apartments in Paris and I can tell you that (concierges and other difficulties aside) French flats have their charms. Often they’re less expensive on a per person basis than five star, four star, and even many three star hotels. Some come with charming views. Some are located in elegant old townhouses. Some feature herringbone parquet floors, spiral interior staircases, and views through casement windows that make you feel you’re in an old movie about La Belle Epoch, and that Leslie Caron or Maurice Chevalier will arrive at any moment.

On one stay at Paris, I slept in a triplex apartment on Rue de Seine in the Sixth Arrondissement. My bedroom was on the highest of the triplex’s three floors, in a space glassed in on two sides. It afforded a view of the Eiffel Tower in the distance and the Pantheon a bit closer. There was even a view of the Eiffel Tower from the toilet. As for the concierge, she had only half her teeth (left side upper and lowers; none on the right side) and bitterly accused our foursome of conspiring to break her tiny elevator by squeezing in two at a time. That was the way Paris used to be before Parisians became cosmopolitan, began welcoming visitors warmly, and even learned English (with the exception of apartment building concierges.) The price of this Rue de Seine gem? Approximately $3,800 for seven nights, shared by two couples, or under $300 per night per couple. Each couple had their own bedroom and bath. We shared a kitchen where we could keep fresh Camembert in the refrigerator for snacking, or brew coffee, or cook dinner if we were crazy enough to pass up Parisian restaurants for our own recipes. There was even a washer-dryer, so we could come home with clean laundry.

But living like a Parisian means exactly that. For example, visitors staying in a hotel can walk to the front door and have a doorman hail a cab for them. Parisians have to walk to the nearest taxi stand and endure waiting in an orderly queue for a ride. (However, I found that this was a great opportunity to strike up conversations with the locals.) There’s no minibar in your apartment stocked with wine, whisky, mineral water and peanuts. You’ll have to find the nearest Monoprix market for your bottles of Evian or Badoit, as well as your detergent for the washing machine. (On the other hand, you can have a wonderful time shopping for cheese at the local fromagerie and for just-baked bread at the boulangerie.

Unlike hotel concierges, your concierge will at best reward you with a sneer if you ask her to reserve a restaurant table for you. Better to do that well before you leave home, since even the average Parisian lacks the clout of a concierge at the Hotel George V when it comes to getting last-minute reservations at hot restaurants. The triplex I stayed in was clean enough, but the furnishings and paint on the walls were a bit tired compared to their photographs on the Internet. And both females sharing the apartment complained that those narrow spiral stairs between levels in the apartment caught their high heels. They had to go up and down the stairs shoeless. For me this was part of the apartment’s quirky charm. For the women, it was a nuisance.


How to find apartments
You can simply Google “Vacation apartment rentals, Paris” and you’ll discover an ample list of rental agencies. Minimum rentals are usually a week, and there may be extra charges tacked on such as cleaning before your arrival or after your departure, and taxes. Some landlords demand a security deposit. Avoid surprises by asking before you book for a complete list of extra charges. I used a service called FranceForRent.com and was delighted to discover they had a representative in the United States who could answer my queries by phone and help get things arranged. He even arranged to have a driver pick up our party at the airport, a not-cheap add-on which I bought, simply because it meant that the driver would get us into the apartment and know precisely how to get his hands on the keys.

Most websites show several photographs of each apartment. What you see, and what’s listed as the apartment’s amenities on the Internet is generally what you get. If you don’t see a bed, you may have to sleep on a convertible couch. If it doesn’t say “elevator” be prepared to do some heavy-duty stair climbing. The “first floor” in France is the equivalent of the second floor in the United States, the “second floor” is three flights up, and so on. While the amount of space, number of beds and other amenities help determine the price, so does the location.

You can save quite a bit by staying in one of the neighborhoods on the outer edge of the city, but I wouldn’t recommend that any more than I’d recommend visitors save money in New York by staying in the north Bronx. I’d suggest sticking to quarters in the first through eighth arrondissements, and finding some other way to cut costs if you need to. Finally, use Google to find out if the rental service you’re planning to use has received any bad reports. I’m willing to believe that most of the agents are honest and eager to please. However, occasional scoundrels do come along. I remember reading about a man in a wheelchair who arrived at his elevator-equipped building only to discover the elevator had been out of service for weeks. And he had a devil of a time getting a refund. Stuff happens, as they say. But if you’re ready to dip your toe into the experience of living like a Parisian, and save some money too, this could be the way to go.
Email Post
Labels: apartment rentals Lutetia Monoprix Paris Paris apartment rentals the Ritz