It’s time to kick off the 2012 series of Fancation (vacations built around going to a baseball game or other sporting event) articles with the Fancation that’s closest to where I now live: Yankee Stadium. If you're hungry for more NYC articles, please check out my weekly column on AllNY.com, Stuff to Do, Meryl's Picks, or my NYC restaurant reviews.


Red, white and blue may be the colors representing our nation but in the Bronx, it’s all about blue and white.  Blue and white pinstripes. Hop on the number 4 train heading uptown when the Yankees are playing at home and the sea of pinstriped jerseys and New York Yankees caps is overwhelming. The original “House That Babe Built” -- the nickname for the old Yankee Stadium thanks to Babe Ruth's mark on the team during his reign as a Yank -- is no more, but the Bronx Bombers’ new stadium welcomes the 27 World Championship team with pride. Since the first game on April 18, 1923, Yankee Stadium has hosted more than 37 World Championships and has gone through a lot of remodeling to accommodate its continually growing fan base. The most recent and extensive change has been the demolition of the old stadium and the construction of a new one, the most expensive baseball stadium ever built. The new stadium sits just across the street from the site of its predecessor, now a park for the neighborhood.

Three-year-old Yankee Stadium seats 50,287 and offers about a dozen restaurant and dining options including the sit-down Hard Rock Café and NYY Steak. Prices are steep for both food and drink, like the price of Yankee tickets, but the options are a cut above the standard hot dogs and beer that you find at many stadiums.  If you want a meat fix to take back to your seat, try Carl’s Steaks for a decent Philly cheesesteak or Lobel’s Steaks for a New York no-cheese version. Not interested in watery beer? Try an authentic mojito. You can also stuff yourself with sushi, Cuban sandwiches, fried dough,  nachos, guacamole and the baseball-stadium requisite garlic fries, pretty much reflecting every local taste preference.  But what I’m most excited about  is Torrisi Italian Specialties' Parm stand in the Great Hall between gates 4 and 6 which gives you a taste of their fabulous parm menu from NoLiTa. Much better than their standard turkey sandwiches. 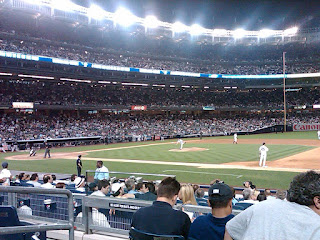 When planning where to sit, behind the dugout is always popular but ridiculously expensive, so consider a real fan experience and opt instead for the bleachers. Here you can do the “Roll Call” with the Yankees’ own unofficial cheerleaders, the Bleacher Creatures. At every game since the late 90s the rowdy bunch chants the players’ names as each enters the field and do so until the player acknowledges them with a wave or a thumbs-up. Also listen for the music played when there's a call to the bullpen: the song is chosen by the pitcher himself, like Mariano Rivera's "Enter Sandman."  If you'd rather be a participant in the musicality of this stadium, you can belt out Frank Sinatra’s classic “New York, New York” at the end of each winning game. When the Yanks lose, Liza Minnelli’s rendition is played instead (she sang it in the 1977 movie of the same name).

Be sure to watch the screens for the various trivia questions and games that happen throughout the game; sometimes they can be more entertaining than the game itself.  Also, at least once, visit Monument Park before a game (leave a lot of time because of the long lines) and pay homage to some of the best baseball players to ever suit up in pinstripes: Joe DiMaggio, Mickey Mantle, Lou Gehrig and, of course, Babe Ruth. 1 E. 161st Street, Bronx, NY 10452; 212-YANKEES.

For tickets, search your location and book online.


Although most people don't think of sticking around the Bronx for a day of activitites, there's quite a bit to see in this culturally diverse New York City neighborhood.

Escape to Paradise: The impressive and ornate Paradise Theater is one of the Bronx' best-kept secrets.  Built in 1929, the once-bustling Loew's Paradise movie theater underwent many remodels and repairs after being closed for almost 10 years Landmarked and reopened in 2005, it still has the original Greco-Roman statuary and "Atmospheric"-style architecture along with an up-to-date auditorium, stage and seating. Some of the highlights:  frescoes inspired by the Sistine Chapel in Italy adorning the ceiling and a luxurious marble staircase which curves up from the main auditorium. The theater offers a variety of kids’ shows like Barney Live in Concert and concerts such as the Heart & Soul Big Classic Soul Jam. If no performances are scheduled when you're in town, ask for a tour. The building is spectacular.
2413 Grand Concourse, Bronx, NY 10468; 718-220-1015

Get Wild:  The Bronx Zoo has something for everyone. Whether you prefer feeding the farm animals up close and personal at the petting zoo or watching the reptiles devour their lunch from afar, you’re sure to be entertained. There’s always something new happening at Jungle World, with its otters, gibbons and 800 other animals, or at Tiger Mountain and the always-dramatic Congo Gorilla Forest. The little ones will enjoy The Bug Carousel, Zoo Shuttle and the Wild Asia Monorail. And you can even ride a camel. Say hello to the zoo's newly famous escapee (and returnee), Mia, whose name means "missing in action."
General Admission tickets are $12 for children under 12 and $16 for adults.  The park is open daily from 10am-5pm (until 5:30 on weekends).
2300 Southern Boulevard, Bronx, New York 10460; 718-220-5100


Stop and Smell the Chrysanthemums:
No trip to the Bronx is complete without a visit to one of our country’s historic landmarks, The New York Botanical Gardens. In celebration of its 120th anniversary, there are numerous exhibits and programs in the more than 50 landscapes and gardens within the 250-acre Botanical Gardens. Containing more than one million plants, the diverse collection draws large crowds especially for the annual The Orchid Show, Kiku: The Art of the Japanese Chrysanthemum, and the Holiday Train Show. Children and adults alike can learn the importance of plant life and how to keep your plants healthy and growing. My favorite time of the year: May and June when the daffodils and roses bloom. Simply gorgeous.
Open Tuesday through Sunday from 10 am–6 pm. Check the website for General Admission ticket pricing.
Bronx River Parkway at Fordham Road, Bronx, NY 10458; 718-817-8700

Eat:  City Island is a seven-mile drive northeast of Yankee Stadium. Unfamiliar to many visitors to NYC, this 1.5-mile strip of land offers a wide variety of seafood restaurants in a boat-friendly residential area. Try the Lobster House for a lobster and crab lunch or dinner and check out the boats by the restaurant's own marina. Or Sammy's Fish Box. You'll probably feel like you're somewhere in New England rather than in New York City, although the prices are a bit higher.
691 Bridge Street, City Island, NY 10464; 718-885-1763

Little Italy -- Arthur Avenue is one of the best-kept secrets of the Bronx, a thriving area of Italian food and culture. Generations of Italian families have flocked to this area to set up a home away from home. Often called Belmont, and less touristy than Manhattan’s Little Italy, this area is considered to be more authentic throughout.  Arthur Avenue is a place where Italian restaurateurs as well as local families do their shopping.  There are shops, restaurants, and an indoor Retail Market with vendors selling Italian breads, pasta, gelato, sauces and fresh meats. Restaurants are family-friendly and serve copious portions; many like Dominick’s have no menus – just ask for your favorite dish or let the server surprise you with the evening’s specialty. Another favorite is Mike’s Deli where you can stock up with items for cooking at home or put together a meal to eat on the spot with cured meats, olive oil, Italian cookies, and other delicacies.
2334 and 2344 Arthur Avenue, Bronx, NY 10458 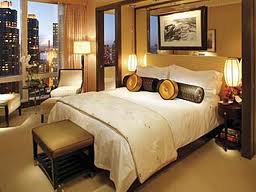 Sleep:  Head back to Manhattan to enjoy a good night’s sleep in one of the top hotels in the city. With the Columbus Circle subway hub adjacent, this is an easy commute from Yankee Stadium and a day in the Bronx.  Here you’ll enjoy one of the 248 luxe rooms at the five-star Mandarin Oriental Hotel where relaxation is the main goal. Overlooking Central Park and located in the pulse of the city in Columbus Circle, the Mandarin Oriental offers ultra-pampering spa services, top-flight dining and drinking options, and knockout views of Manhattan.  Asiate, the hotel’s Asian-inspired restaurant has striking Central Park-inspired décor, an award-winning wine collection for lunch and dinner, and an amazing breakfast selection that includes a Japanese bento box assortment.  Relax post-game at the MOBar or Lobby Lounge, drinking in both the incredible views and your favorite cocktail.  The B or D subway lines will bring you right from the ballpark to the front of the hotel.
80 Columbus Circle at 60th Street, New York, NY 10023; 212-805-8800

Shop:
From the Mandarin Oriental, you can easily walk to the attached Time Warner Center with its fantastic array of shops (Montmartre, Hugo Boss, Eileen Fisher, Stuart Weitzman) and restaurants (Bouchon Bakery, Per Se, Porter House, A Voce, Bar Masa).  Or, go super elegant and head over to Fifth Avenue where the famous street is lined with high-end boutiques like Chanel and Pucci, and kid faves like American Girl and H & M. If you'd rather window shop than spend, you’re still in for a real New York experience: the male models of Hollister strut their stuff in front of the store during the warmer months and Bergdorf Goodman’s window displays redefine fashion and artistic creativity at any time of the year.
Time Warner Center, The Shops at Columbus Circle, 10 Columbus Circle
Email Post
Labels: A Voce AllNY.com Arthur Avenue Asiate Botanical Gardens Bronx Bronx Zoo Chanel City Island Columbus Circle Fancation Fancations Mandarin Oriental Paradise Theater Per Se spa Yankee Stadium Yankees