April Wine Events in NYC: Some Free, Some Not 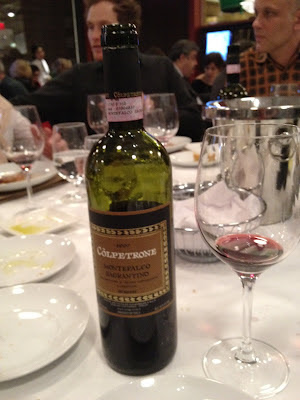 This is a great month to sample some unfamiliar Italian wines if you're planning to be in NYC with free wine tastings, some ticketed wine dinners, and other events.
I got a sneak peek at these wonderful wines at Eataly’s wonderful Manzo restaurant, where I sampled a number of wines not previously known to me but ones that deserve special commendation: the versatile Adanti, Montefalco Rosso, a blend of Sangiovese, Sagrantino and other grapes, nice and smooth and very drinkable with or without food; and five 100% Sagrantinos, tannic in character and very interesting as they opened. Names to remember here were Castelbuono, Perticaia, Caprai, Còlpetrone and Scacciadiavoli (meaning “scrapes the devils”). For dessert, I was completely captivated by Antonelli’s Sagrantino di Montefalco Passito, made from grapes that have been left to dry for at least two months, effecting a sweet yet still tannic wine. Served slightly chilled, it was amazing. I also learned that these red wines are among the healthiest in the world due to this tannic quality, having high resveratrol levels which help protect the heart. I didn’t try any white wines but I’ll be interested in trying Montefalco Bianco, made of Grechetto, Trebbiano Toscano and other grapes. If this wine is as exciting as the reds, it should be another revelation.
If you want to experience more of this wine from Umbria, you can participate in classes all month as well as in tastings as I did. Winemakers from Montefalco will offer classes at Lidia Bastianich’s La Scuola along with free wine tastings at Eataly Vino. All Eataly restaurants will offer Sagrantino and other Umbrian wines by the glass as well.
Other locations offering free wine tastings with the winemakers include Enoteca of Di Palo’s Fine Foods, Seagrape, Vestry Wines, Morrell and 67wine. Two ticketed wine classes with the winemaker will be held at La Scuola on April 19 and 26. Ticketed pairing dinners are planned for Felidia, SD26, Trattoria 5 and Bocca. You can see a full schedule of events at http://www.colangelopr.com/montefalco. Eataly is at 200 Fifth Avenue, 212-229-2560, www.eatalyny.com.
Email Post
Labels: Eataly Sagrantino wine events