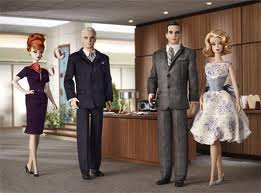 Don Draper. Betty Draper. Roger Sterling. Joan Holloway. I have to admit that I can’t wait to see them tomorrow on the premiere of Mad Men, Season Four. I’ve missed them: Don’s mysterious seriousness, Betty’s ice-cold stares, Roger’s know-it-all lechery, and, of course, Joan’s take-charge competence. I’ve been toying with the idea of buying each of Barbie’s new Mad Men collectible dolls. I don’t really understand the concept behind them, but they are interesting. At $74.95 each, I wonder if they come with cocktail mixers, wardrobe changes, and hair stylists.
I’m ready for the smoke-filled offices of the new agency, the new home and life of Don Draper, the vintage ads and TV shows, and the wonderful ending music that recalls the turbulent 60s. I’m so ready.
In the meantime, with thoughts of joining Don and Roger over oysters at The Oyster Bar or drinks at The Roosevelt Hotel, I’ve put together a list of cocktail fixes throughout Manhattan that will get you ready for another season of Mad Men madness.
Temple Bar: The glamorous oak bar in NoHo is known for its extensive drink list peppered with all the classics. Imagine yourself sitting with Don among the beautiful velvet curtains sipping an Old Fashioned or with Peggy Olsen as she tries a Brandy Alexander for the first time. 322 Lafayette St, 212-925-4242
Monkey Bar: Enter the landmark Hotel Elysée (once known as the “easy lay”) where guests like Joe DiMaggio and Marlon Brandon used to stay. Step inside the great piano bar just off the lobby with its iconic monkey mural. You can just picture Roger downing a Manhattan or two before heading for a room upstairs. Hotel Elysée, 60 E 54th St, 212-753-1066
King Cole Bar: Once a bastion of cigar-smoking power brokers or wannabes like Ken Cosgrove, the King Cole Bar in the elegant St. Regis Hotel is the birthplace of the Bloody Mary (known here as the Red Snapper). This classic bar also is known for its famous mural, “Old King Cole” by Maxfield Parrish. St. Regis Hotel, 2 E 55th St, 212-753-4500
21 Club: Famous for its Prohibition-era speakeasy status, this restaurant has attracted every president since FDR (except George W. Bush) to dine or imbibe. Come for a martini just like James Bond in 007 or try New York Magazine’s recommendation, a Southside, the rum and mint cocktail invented here. 21 W 52nd St, 212-582-7200
Campbell Apartment: This luxurious lounge in Grand Central Terminal will surely bring you back to another era. The space, once used as an office for New York financier John Campbell, still exudes the same sleek, refinement with its low lighting, rich woodwork and beamed ceiling. We’d recommend the Prohibition Punch for aptly named Pete Campbell. 15 Vanderbilt Ave, 212-953-0409
Bemelmans Bar: Some things never go out of style. Tommy Rowles has been the bartender here for 51 years and has even poured bourbon on the rocks for President Truman. Live piano music, enchanting murals of animals by Ludwig Bemelmans of Madeline fame, plus formally dressed waiters make this an Upper East Side landmark. The perfectly chilled and poured martini comes in a shaker with enough liquor for a potent drink and a half, and the banquettes are perfect for cuddling. The Carlyle Hotel, 35 E 76th St, 212-744-1600
The Blue Bar at the Algonquin: Once the hot spot for literary geniuses like Dorothy Parker and Robert Benchley, The Blue Bar is filled with Al Hirschfield’s artwork depicting a variety of Broadway shows. The cozy bar with its blue upholstery is known for its Algonquin Cocktail, a mix of whiskey, dry vermouth, and pineapple juice. It’s reputed that the literary ghosts of times past will even sit with you to provide inspiration and absorb the black-tie service. The Algonquin Hotel, 59 W 44th St, 212-840-6800
Sardi’s: Since 1921, this legendary restaurant known for the celebrity caricatures adorning its walls has served as the spot to head to before or after theater. It’s also a favorite rendezvous spot for Don Draper and his lady friends like the sultry Mrs. Barrett. To behave like a true “mad man,” book a table on Thursdays and Fridays for jazz and cabaret and skip the cocktail; a bottle of Dom Perignon is more in keeping with the mood. 234 W 44th St, 212-221-8440
The Oak Bar at the Plaza: Originally filling the entire Oak Room restaurant space in the Plaza Hotel, the Oak Bar was conceived as a men’s-only enclave when it opened in 1907. Now restored to its original glory surrounded by impressive “frozen in time” murals, the bar serves up a Classic Sidecar to enjoy with a menu of bar items until the wee hours. Plaza Hotel, 10 Central Park South, 212-758-7777


And, if you're in Times Square (Broadway between 46th and 47th streets) tomorrow night, here's the schedule of the free festivities AMC is planning for you:
7pm Last Mad Man Standing Trivia