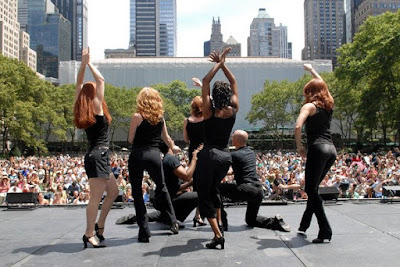 It's Broadway for free in Bryant Park on Thursdays in July and August. Escape the office, pack your lunch and a blanket and head to Bryant Park for one of my favorite free events, “Broadway in Bryant Park.” Each weekly concert features songs and performances from four-five Broadway favorites and lasts approximately one hour from 12:30pm - 1:30pm.

Check out this summer’s schedule:

Bryant Park is located behind the New York Public Library between 40th and 42nd Streets & Fifth and Sixth Avenues. The nearest subway stops are 42nd Street/Bryant Park (F, V, B, or D trains) and (7 train).

If you still have time, grab a book from the Bryant Park "Reading Room," a cart behind the library where you can borrow a book free.