It’s a Laugh a Second at Forbidden Broadway: The Next Generation at the York Theatre Company

Run, don’t walk to The York Theatre Company to see Gerard Alessandrini’s latest rendition of Forbidden Broadway, this time called Forbidden Broadway: The Next Generation. It’s indeed next generation, advancing the beloved show from its 1982 roots to a new version that gives it a 2020 vision. This is a show that will leave you breathless with laughter as well as breathless in general as you try to keep track of all the Broadway  shows (and some TV series) lampooned here. It’s like trying to tally up the song snippets included in Moulin Rouge, but this time mashed up into 90 minutes of Broadway parody. 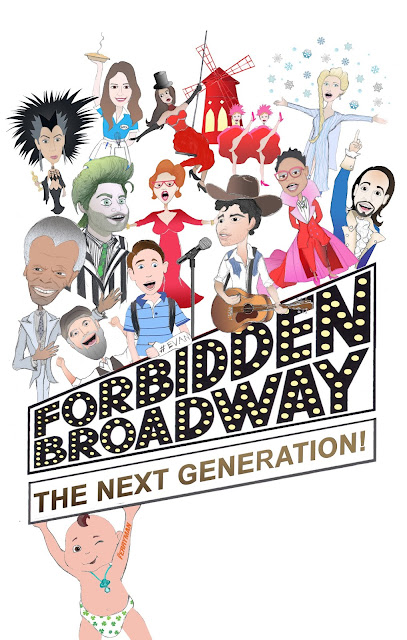 Opening with a familiar shout out to Merrily We Roll Along which closed quickly after its premiere and the brilliantly choreographed “God I Wanna See it 2019” spoofing Chorus Line’s impassioned opener “ I Hope I Get It,” Forbidden Broadway: The Next Generation introduces the Broadway scene of today.  Prepare yourself for a rollicking journey through the plays and musicals presently on Broadway as well as an insightful dissection of everything that could be considered less-than-perfect on the stage. 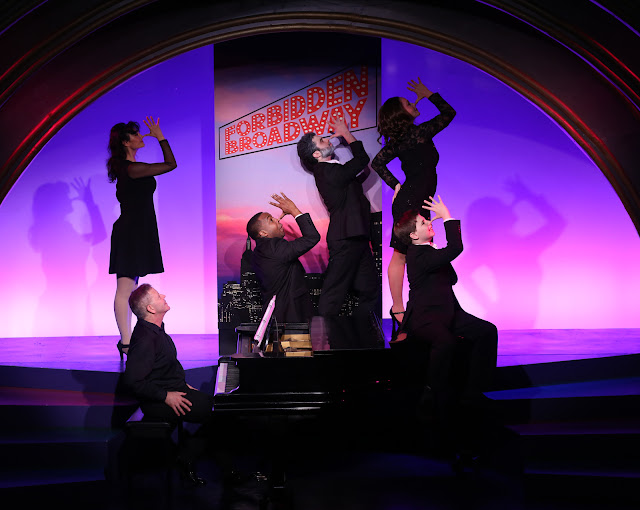 Take, for instance, the show’s mockery of the current obsession with jukebox shows or with turning old movies into musicals and you’ll get the idea. There’s a spin-the-wheel segment called “It’s Got to Be a Musical” where Hal Prince’s Broadway roulette wheel lands on any number of novels or movies and turns them into instant musicals. It kind of reminds you of “Something Rotten” where the Bottom brothers devise a brilliant plan to save their acting company by producing a musical. Has Broadway found its salvation by turning everything into a musical? You can draw your own conclusion after watching. 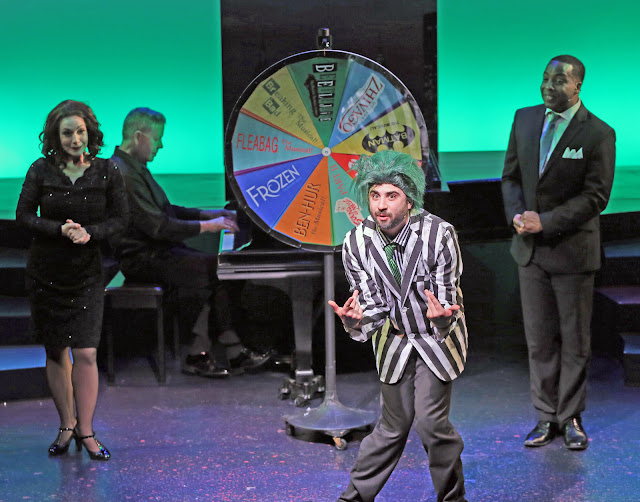 Immanuel Houston is instantly recognizable as André De Shields in Hadestown, extolling the New York subway train as the train to the underworld. Chris Collins-Pisano, a visual body double for Jake Gyllenhaal, plays a mean Danny Burstein in Moulin Rouge! as well as Lin-Manuel Miranda in that little show you’ve heard about, Hamilton. The two female performers, Jenny Lee Stern and Aline Mayagoitia, are skilled chameleons who portray Bette Midler and Bernadette Peters as well as characters in shows like The Ferryman (Aunt Maggie and Caitlin) and Sweet Charity with believable exaggeration. In a tour de force performance belying his age, 13-year-old Joshua Turchin, the youngest performer ever in a Forbidden Broadway show, wows as Dorothy Michaels from Tootsie and Ben Platt from Dear Evan Hansen.  And those are just a few of the scene-stealing performances that you’ll see. 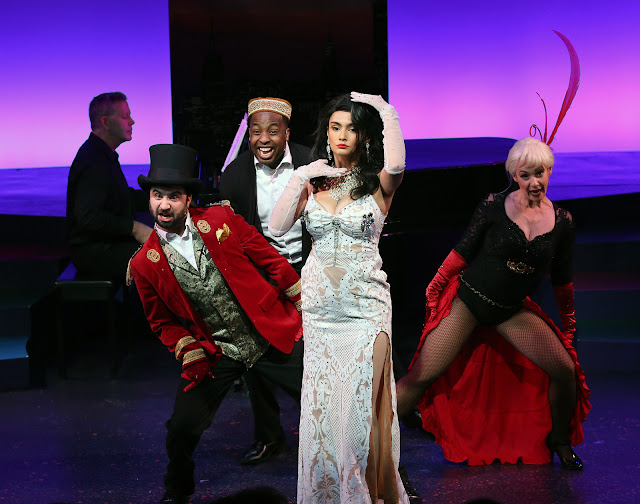 I laughed and guffawed through the entire show, nodding in non-vocal acquiescence to some very insidery comments about theater today as well as the lifestyles of stars well-known from the Great White Way. But it really doesn’t matter if you’re not familiar with all of the shows parodied, as most of the stars will be recognizable and a good number of the songs, including many classic Broadway show tunes, will have you pondering, “Which show is that from?”

Forbidden Broadway: The Next Generation also takes a stab at some of the Broadway-themed shows and personalities that have appeared on TV of late, like Fosse/Verdon with stars Michelle Williams and Sam Rockwell or Billy Porter’s cross-dressing appearances on multiple talk shows. How do you feel about the move into movies by stars playing stars like Renée Zellweger as Judy Garland? There’s no equivocation here. 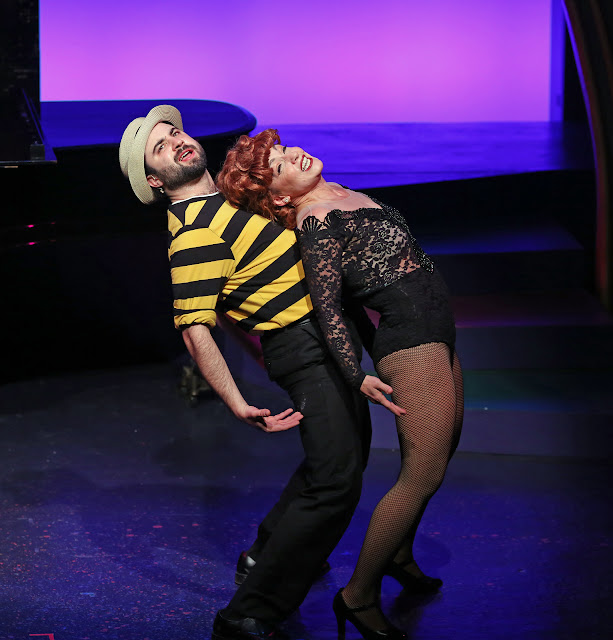 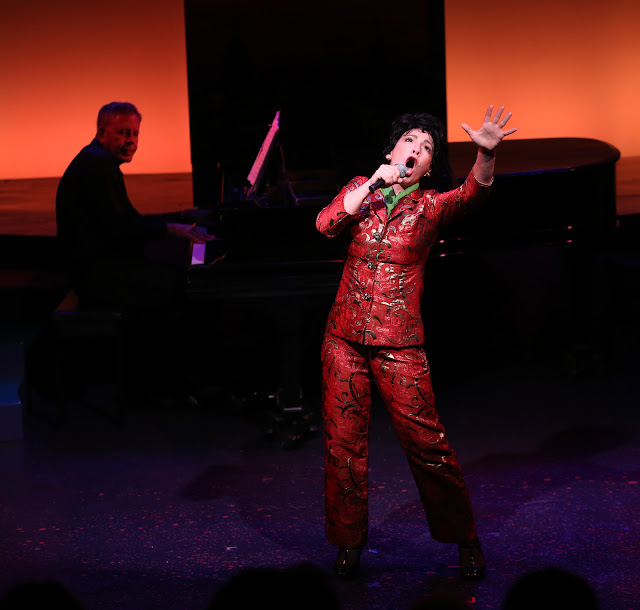 Choreography, performances and costumes all have their moment over the theatrical coals.  Alessandrini spares nothing and has a keen eye for pointing out the lunacy of much that has captured popular attention. If Broadway’s dissolution into jukebox musicals has you pining for the Broadway musicals of yore, you’ll immediately relate to several of the skits with some shows positioned as thinly veiled remakes of each other. If the tone of a various type of play – in particular, Irish theater – has you weeping from the very first line delivered, you’ll laugh instead when you see how this is treated by Forbidden Broadway. Perhaps the most hilarious spoof is that of Fiddler on the Roof’s recent remount in Yiddish, with the rhetorical question, do we no longer need to understand theater but just conceptualize it? “Brush Up Your Yiddish” indeed. Cole Porter must be rolling in his grave. As must Richard Rodgers and Oscar Hammerstein in theirs… you’ll see what I mean. 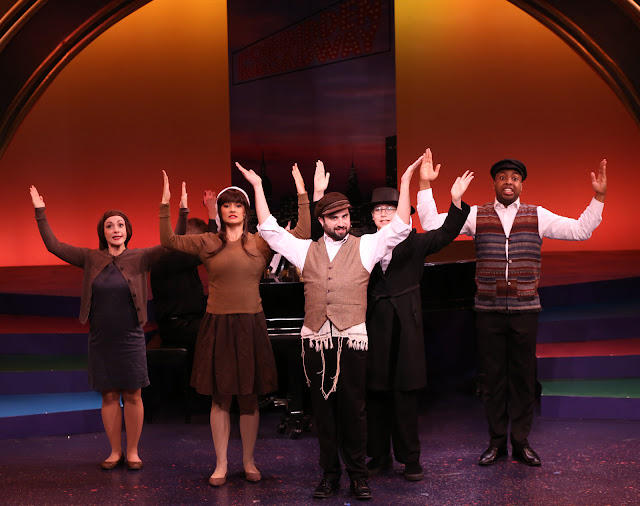 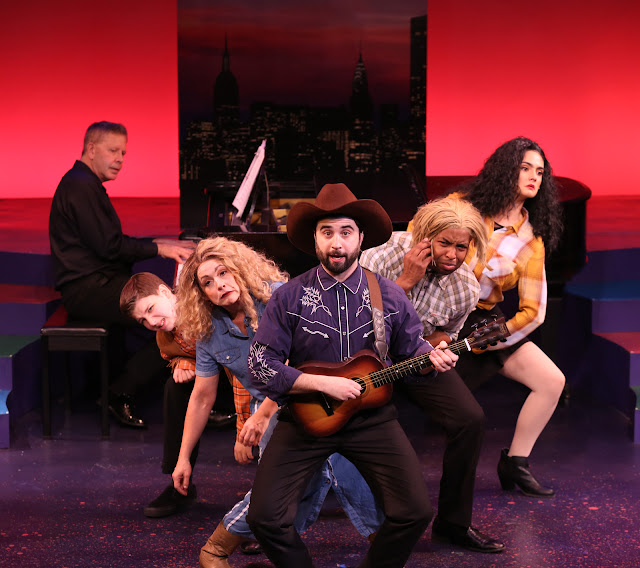 I don’t want to give too much away as a good part of the momentum is the build from one hilarious spoof to the next, often with an unexpected change-up of songs midstream that circles and reverts, catching you off-guard with the brilliance of Alesandrini’s lyrics, the vocals and the character impersonations. Rest assured, however, that the current lineup of hits and flops on Broadway have all been skewered here. The show is very much of the moment in that regard, but as the writer notes at one point, Forbidden Broadway: The Next Generation, like all Broadway, “stands on the shoulders of the last generation” so you’ll see much of the past reflected as well. 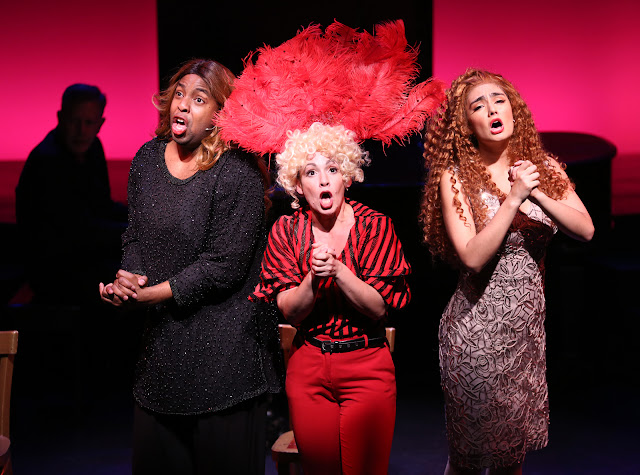 Given all the hilarity, it is indeed sad that this show runs only for a month. The brilliant writer and performers should have their day in the sun, or, at least, on-stage. I can only hope for a transfer of this show to another theater should the space at the York not be available past February 16. Tickets , www.yorktheatre.org, 212-935-5820. York Theatre Company, Citicorp Building, entrance on 54th Street just East of Lexington Avenue, New York City.

All photos by Carol Rosegg.