Celebrate the Year of the Rat with Dining and Shopping Specials

Lunar New Year is one of the most celebrated holidays around the world, a time when families gather and celebrate. This year is the Year of the Rat, signifying diligence and thriftiness. Shops and restaurants have gone all out to ensure that you have a lucky and fortune-filled start to the New Year with welcoming events and special menus adding foods symbolizing good fortune.

The Year of the Rat celebrates the return of spring. It’s a festival of unity, a way for friends and family to come together to enjoy traditions that will bring good fortune for the coming year. 2020 celebrates the quick-witted rat as we breathe some optimism into the days ahead. Unlike one-night New Year’s celebrations, Chinese New Year is celebrated for two weeks through February 11 (or even longer in some places) so you have plenty of time to enjoy.

Stuff yourself with auspicious foods rich with symbolic meaning to attract good fortune in the coming year.

The sexiest celebrations in New York City, San Francisco and Las Vegas happen at Hakkasan. Kicked off by a festive and traditional lion dance on the first evening, the two weeks of the Chinese New Year are filled with special dinners and drinks. For 2020, there is a $98 prix fixe menu (for a minimum of two guests) featuring ingredients traditionally thought to bring luck and good fortune. Dishes have been selected for the cultural significance of their ingredients and their ability to portend good fortune.


Highlights of the menu include golden treasure pockets with abalone and wild mushrooms, a delicately fried dumpling decorated with gold leaf. The shape of the dumpling resembles a money bag which symbolizes the arrival of wealth in the New Year, and the color gold represents riches. Scallops with taro mousseline and brown butter black bean sauce feature Maine king scallops, a prized ingredient denoting new opportunities and successes on the horizon. Also on the menu are yu sheng salad, a fish salad with cured Scottish salmon and plum sauce, portending a bountiful year ahead; and baked salt crusted chicken, a modern spin on a chicken dish from the Ming dynasty that symbolizes luck, playing off the pronunciation of the word chicken in Chinese which sounds like luck.


Hakkasan will also offer a signature cocktail Cheng Zi made with Diplomático Mantuano rum, chili-infused Velvet Falernum, mandarin and chocolate sherbet. The mandarin is a lucky ingredient representing prosperity and fortune, making the cocktail the perfect complement to a festive Lunar New Year meal. Oranges are traditionally given during the New Year to symbolize good luck, happiness and abundance.

A sweet finish with more lucky oranges is the indulgent Lucky Jie, a dessert with salted caramel ganache, mandarin, chili and cocoa that is presented as a Chinese knot to signify good fortune. Chinese knotting is an intricate and historic art form where fabrics are woven into a varying of shapes denoting blessings and wishes for the year ahead.

Throughout Lunar New Year, interiors of Hakkasan locations will be adorned with red wishing ribbons featuring the lucky Chinese knot. The red color of the wishing ribbons symbolizes joy and good luck, creating an auspicious environment for guests to dine in. Guests are additionally invited to write their wishes for the year ahead on the ribbons to be hung on the restaurant’s wooden latticing.

Five other Asian restaurants (and bars) in New York celebrate with special menus:

Little Alley is translated from the Chinese word long tang, the narrow, interconnected alleyways unique to Shanghai that form traditional neighborhoods that co-exist with today’s modern styles. The alleys have long been redolent with aromas of delicious foods, reminding neighbors that everything will be fine as long as you are home.

At popular Atoboy in the Flatiron District, Chef Junghyun 'JP' Park utilizes Korean flavors and traditional Korean techniques with seasonal American ingredients to create a menu inspired by Korean banchan, small plates served with cooked rice. For Chinese New Year, both a regular and prix fixe menu are offered along with a traditional tteokguk, a Korean rice cake soup.

In Chinatown, LUCKYRICE celebrates the Lunar New Year in style with an epic Cocktail Feast on January 28 at stylish Chinese Tuxedo and its “no photos,” bar Peachy's. This historic venue once housed a Chinese theatre in the late 1800s and the theatricality continues to this day both upstairs and downstairs. Specially created cocktails featuring Remy Martin and delicious bites, each symbolic of the auspiciousness of the New Year, will be served. Tempting menu specials include the fried golden tuxedo money bag dumpling with chicken corn and the duck “long life” chow mein noodles with roasted duck sauce.

Shoppers have many ways to celebrate the Year of the Rat

The USA Luxury Shopping Consortium has planned an array of special events and experiences for visitors in San Diego, Las Vegas and New York.

Visitors to San Diego are invited to Fashion Valley’s Lunar New Year family festivities on January 31. In the Macy’s courtyard, impressive red lanterns overhead set the stage for community performances and an illuminated dragon and lion dance, a traditional dance performed to invite wealth and prosperity while warding away evil spirits and misfortune.

Through February, The Forum Shops at Caesars Palace will showcase a 22-foot long, six-foot wide and 12-foot high dragon. The massive 950-pound dragon is covered with 30,000 red and amber LED lights, many of which flicker, giving the mythical beast a vibrant look and dynamic feel. On January 29, The Forum Shops at Caesars Palace welcomes 120 students who will perform the traditional dragon parade. 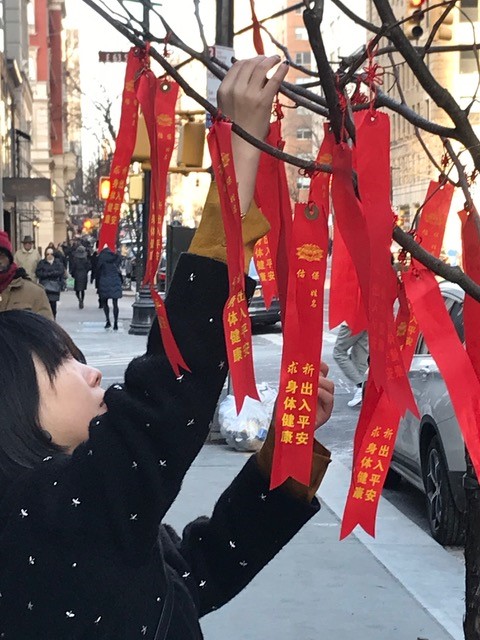 The 5th Annual Madison Avenue Lunar New Year event kicks off on February 1 with a centuries-old tradition by installing wishing trees along Madison Avenue between East 63rd and East 64st Streets. Visitors can place a ribbon with their wish on a branch at the tree on 63rd Street to receive a traditional red envelope with a gift certificate from a participating Madison Avenue store.