Party on! A Look at Some Interesting Festive Season Traditions around the World

I’ve already broken my New Year’s resolution. I had said I was going to observe Dry January this year. HA! Well, that lasted five days until I met two wonderful wines, a tangy orange vintage from Slovenia (I can’t resist orange wines – there’s something about a white wine that turns amber from leaving the skin on that drives me crazy), and a luscious, chilled red from France's Loire Valley. Like a Lambrusco but without the effervescence, this wine was perfect and had the elegance I had learned to appreciate in Mendoza where all red wines are served chilled.

My ongoing enjoyment of the holiday season into early January gave me pause and made me want to re-examine some of the more interesting traditions across the world during the last weeks of the calendar year and into the new one. Some are actually quite amusing.  Like my trying to keep Dry January any longer than five days. 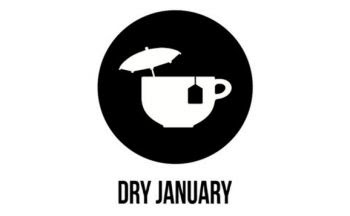 Christmas Eve has a host of quirky observances.

In Poland, locals celebrate this special evening with a feast known as Wigilia, a home-cooked meal of 12 different traditional dishes. As told to me by MIR tours, the dinner is a vigil of waiting for the birth of Christ and is called the Star Supper (gwiazdka), as it begins when the first star is visible in the sky. Creating a manger-like tableau, straw is spread on the table, covered with a white tablecloth, and an extra place is set at the table (sort of like leaving room for Elijah at the Passover Seder) for any unexpected guest. Animals are part of the family celebration, too, receiving pieces of traditional Christmas wafers, oplatek, eaten by all. 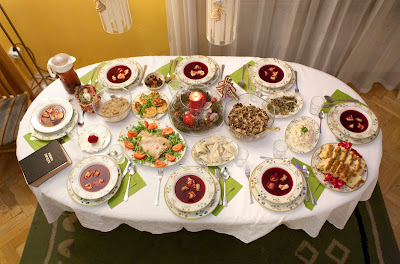 In New Orleans, the 18th-century Creole tradition of celebrating Christmas dinner after Christmas mass continues to this day, with adjusted timing to accommodate all guests. Called Réveillon, these dinners historically began at 2am with a feast of chicken and oyster gumbo, game pies, soups, soufflés, desserts, brandy and coffee. It was a tradition inherited from Europe as a way to break the daylong fast leading up to Christmas Eve. Today, you can book a table at many restaurants in the French Quarter or at hotels like the Windsor Court, where dinner is served well past 10pm (but starting before 2am). Doesn’t sound out of character for New Orleans, does it?

You have to love this one – just look at the photo. Each Christmas at the Jackson Hole Mountain Resort, families are invited to ski with Santa. How cool is that! 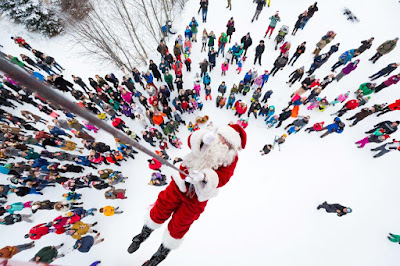 But my favorite Christmas Day tradition happens in Japan.

A “new” tradition from the 70s, the Japanese enjoy a quirky Christmas Day meal motivated by homesick travelers who missed having a turkey while in Japan. KFC responded by offering up the closest thing, the KFC Party Bucket. Today, no one would think of not eating KFC in Japan on Christmas and people place orders months ahead of time, lining up to order their “Christmas Chicken.” I wonder how Colonel Sanders would feel about being dressed up to look like Santa Claus. 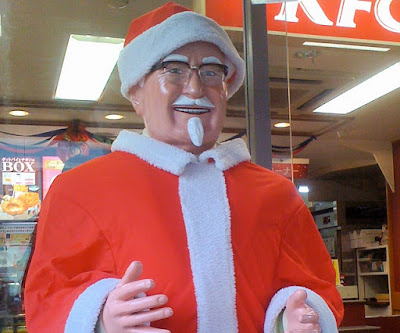 Boxing Day, the day after Christmas, is especially lively in Bermuda with the Boxing Day Beat celebration. Here everybody dances in the streets to the sounds of goatskin drums, beer-bottle fifes and tin whistles. But the highlight is undoubtedly the Gombeys, the traditional troupes of colorfully dressed dancers who have been entertaining Bermudians since the 1800s with their particular mix of British, West African and local cultures. They look a whole lot like the Cajun Mardi Gras celebrants at Louisiana’s Courir de Mardi Gras, the chicken run, don’t they? Except that their main raison d’être is to dance and entertain rather than to beg for sous, chase the chicken and make gumbo. 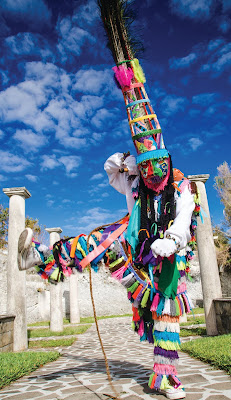 To ensure good luck and uplifting energy, Peruvians don yellow clothing, wearing the color of Peruvian positivity. For double assurance, many wear yellow underwear and even start their New Year’s Eve celebration wearing their underwear inside out. After the clock strikes midnight, they turn it back to the right side, symbolizing changes to be made in the coming year. A big thank you to Darguitours, for this intel about Peru’s most quirky tradition. 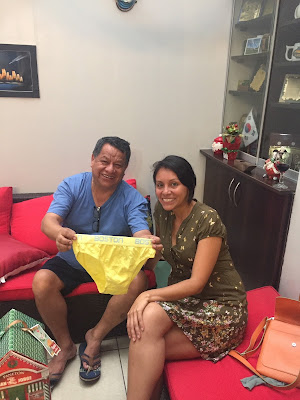 Then there are the Colombians who take an empty suitcase on New Year’s Eve and run around the block as quickly as possible to ensure a year full of travel. I kind of love that one! Probably no one in New York City would even notice if I did that on New Year’s Eve.

The New Year visit to a Shinto or Buddhist shrine (hatsumode) during the three days of Japan’s New Year festival (Oshougatsu), January 1-3, is considered most important during Japan’s most important holiday. In temples across Japan, the New Year celebration is initiated with the ringing of the New Year’s Eve Bell 108 times, 107 prior to midnight and once right as New Year’s begins. Symbolizing the Buddhist concept of 108 worldly desires and the suffering that can ensue from them, ringing the bell reminds people of the prior year’s worldly desires and then wipes the slate clean.

The Roman Guy shared this good luck superstition in Italy. The evening of December 31 includes eating a bowl of boiled lentils during a traditional dinner held to celebrate the new year. If you eat lentils at that time, you are guaranteed good luck and lots of money in the year ahead.  Dating from ancient times, the roundly shaped lentils were stored in small pouches that resembled coins. When cooked, the lentils double in size, symbolizing growth and abundance. 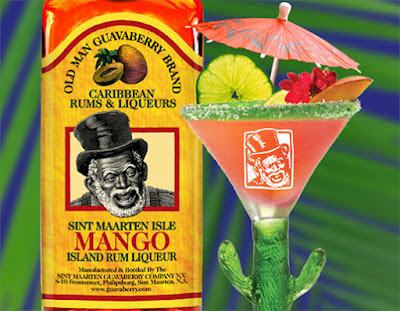 Drinking is traditional on New Year’s Eve, especially toasting with a glass of the bubbly. But not in St. Maarten, where the drink of choice is their own holiday spirit guavaberry rhum made with local guavaberries. Carolers visit friends on the evening and are rewarded with a sip.

Lights – but not traditional Christmas lights – take center stage during the holidays in two of the United States’ most culturally rich and historic cities.

In the Southwest, Santa Fe’s Canyon Road Farolito Walk draws thousands of people on New Year’s Eve creating a parade along this famous art gallery road, decorated for the holiday with hundreds of farolitos, small brown bags filled with sand and a glowing candle. Many of the galleries participate in the event, staying open for shopping, offering hot cider or cocoa, and inviting guests to warm up around bonfires in the courtyards and sculpture gardens. Caroling is encouraged. 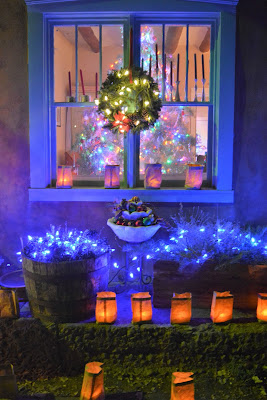 San Antonio’s farolitos are called luminarias. Throughout the festive season, starting right after Thanksgiving, the colorful luminaria celebration is held every year along the San Antonio River Walk which is lined with more than 2000  brightly lit Mexican Christmas lanterns. 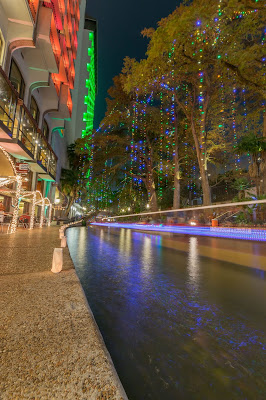 But it may be the Europeans who have the most fun (or insanity) on New Year’s Eve.

I’m sure that my neighbors would have me committed if I did this, but in Denmark people smash plates against their friends’ and loved ones’ front doors on New Year’s Eve. Caleb Black told me about this crazy tradition where the person who ends up with the largest pile of broken plates is said to have the most luck in the coming year. If your pile is smaller, you can judge accordingly. I thought only the Greeks did this in the Plaka.

But wait. The Greeks do smash something on New Year’s Eve, but it’s not plates. It’s a pomegranate. In Greece, homemakers hang the fruit outside their front door and smash it. The number of seeds that fall determines your fate for the New Year. The bigger the pile, the better your luck will be. Thank you, Jenn Nicken, for this gem.

Peru takes a beloved Christmas tradition and extends it throughout the year, the Chocolatada Navideña. Building joy, friendship, and showing love, Peruvians distribute homemade hot chocolate, panetón or sweet breads, and small gifts to children in schools, churches and in the community. The tradition is so popular that chocolatadas are now used to celebrate any event, not just Christmas.

How about an extended New Year’s celebration?

On December 31, Russians party with friends and family at home with an elaborate food spread with mandarins, Russian salad (Olivier salad) and the wonderfully named “Herring under the Fur Coat” salad (shuba). Because there are nine time zones in Russia, New Year is celebrated nine times starting from Vladivostok from East to West. But there’s more. Everything must be prepared to last for ten days, a tradition that dates back to surviving the ten long, winter days of public holidays leading to Orthodox Christmas on January 7. Thank you to Natalia Panasenko for this interesting information! 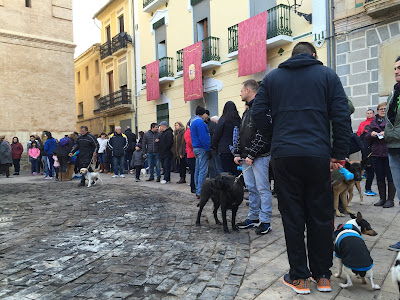 Not ready to put your holiday spirit away? You still have time to make it to Spain for the Blessing of the Animals. Every year on January 17, thousands of people follow the centuries-old tradition of bringing their pets to churches around Spain to be blessed by the patron saint of animals. It’s like the one celebrated at St. John the Divine in New York City on the first weekend in October.  (Photo courtesy of BringFido)