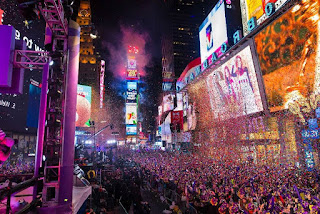 If you don’t mind being in the cold, New York City’s outdoors New Year’s Eve festivities are pretty cool. Take a look at some of these happening in Brooklyn and Manhattan.  Be prepared for long security check-in lines, dress warmly and leave your large bags at home. A flask filled with your favorite libation should suffice to keep you warm!

Coney Island USA will host its 4th annual NYE celebration in Steeplechase Plaza with a fireworks display from the historic Parachute Jump. Select boardwalk restaurants and attractions will be open, including B&B Carousel, Deno’s Wonder Wheel  (just like in Woody Allen ‘s 2017 movie Wonder Wheel) and the Thunderbolt roller coaster. A digital burst ball drop rings in 2018, followed by a Circus Sideshow Fire Spectacular at 1am. http://www.coneyisland.com/event/newyearseve2017 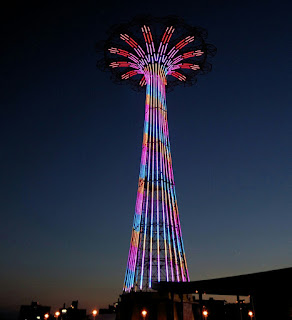 Celebrating its 20th year, the Time’s Up New Year’s Eve Bike Ride & Afterparty will reverse direction, going downtown instead of uptown, and ending at an indoor dance party. If you’re in Manhattan, start the ride at the park in front of the Plaza Hotel at 59th Street and 5th Avenue at 9:30pm, or join in at Madison Square Park, 23rd Street and Broadway at 10pm. Brooklynites can start their ride at the Brooklyn-side entrance to the Williamsburg Bridge at 9:30pm to ride into Manhattan.  End point is the party at the Museum of Reclaimed Urban Space in the East Village, 155 Avenue C. Free valet bike parking. http://times-up.org./node/1861/1514773800/event

The Empire State Building will ring in 2018 with a festive, multicolored LED confetti lighting on Dec 31, 2017. Five minutes before midnight, the building will switch to its signature white lights, sparkling in the New Year through sunrise on January 1, 2018. For a great view, stand by the Little Church around the Corner, 1 East 29th St. and look up. If you're curious about future Empire State Building lights, view the schedule at view the schedule at http://www.esbnyc.com/explore/tower-lights/calendar.