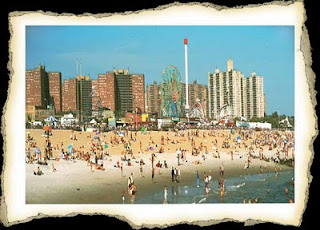 The pre-Labor Day forecast is for the return of 90 degree weather, and that means one thing: beach time! New York City offers a bunch of beach permutations from tar beaches (apartment building roofs) to grassy park areas (Carl Schurz Park and Central Park) to the real deal, a wide sandy beach with lots of body-surfing waves.
Don't have a car? Grab a subway or a bus and take a look at these:
Coney Island Beach, Brooklyn
If crowds don’t bother you and you want a distinctive beach experience, Coney Island is the beach of choice. The three-mile beach has people (lots of people), sand, surf, playgrounds, and courts for basketball, handball and beach volleyball. Thrill junkies will have a blast on the rickety Cyclone rollercoaster or on the tacky rides at newly opened Luna Park. People watching on the boardwalk is even better than sitting on the crowded sand -- grab a hot dog from Nathan's or something from one of the Russian restaurants on Brighton Beach just a way down the boardwalk, find a spot, and watch the many ethnicities of New York saunter by. It's a real New York experience.
BUS: B36, B64, B68, B74, B82, X28, X29, X38.
SUBWAY: D, F, N, Q to Coney Island-Stillwell Avenue; F, Q to West 8th Street-NY Aquarium; Q to Ocean Parkway.

Manhattan Beach, Brooklyn
For a relaxing afternoon of sun, surf and beach volleyball, go to Manhattan Beach on the southern tip of Brooklyn. Not as busy as Brighton Beach or Coney Island because fewer tourists know it, Manhattan Beach is a good choice for sun, surf and beach volleyball. On the southern tip of Brooklyn, you'll find the beach as well as nearby Manhattan Beach Park with two baseball diamonds for a pick-up game, as well as handball, basketball, tennis and volleyball areas. There are concession stands so you won't leave hungry.
BUS: B1 from Brighton.
SUBWAY: Take Q Train to Sheepshead Bay Road. B49 to Cheapside to Oriental and Hastings Street.

Rockaway Beach, Queens
Rockaway Beach is further removed and can feel almost lonely in areas. With a 10-mile long boardwalk, the beach is great for strolling, too, and there are seven playgrounds, skating areas and volleyball courts. Surfers, take note: this is the only beach near NYC allowing surfing with designated zones between 67-69 streets and between 87-92 Streets. Surfboards can be rented on the beach. Grab lunch at Ciro’s Pizza.
BUS: Q22 from bus terminal on Archer Avenue.
SUBWAY: A to Broad Channel then shuttle train.

Orchard Beach, the Bronx
Located at the end of a long, winding path, in an area with lush vegetation, Orchard Beach is harder to get to, meaning that it is less crowded than the more touristy choices but still packed with locals. There are 26 athletic courts for basketball, handball and volleyball, as well as two playgrounds. The central pavilion has food choices and shopping.
BUS: Bx12, Bx29, Bx5, Bx52, and Westchester Line number 45 serve the park. During the summer, take Bx5 and Bx12 to Orchard Beach. During the winter, take the Bx29 to the City Island Circle and walk to the beach.
SUBWAY: Take the 6 line to Pelham Bay Park. Connect to bus (see above).