Here are a dozen places where you can get your latke, sufganiyot and brisket fix in Manhattan and Brooklyn. 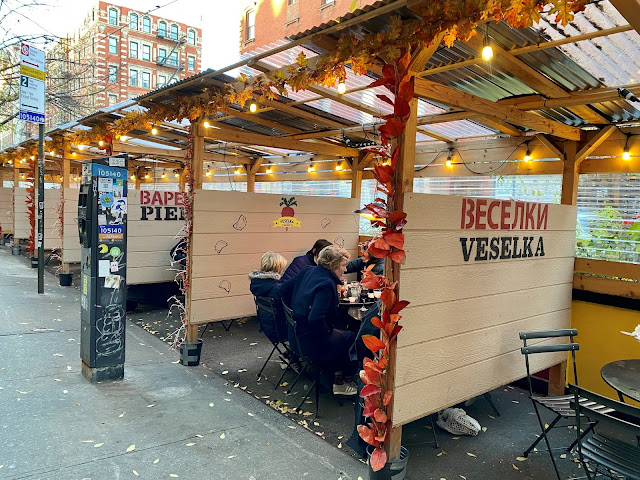 Late-night revelers know Veselka in the East Village. The Ukrainian restaurant has been addressing munchies and warding off hangovers with their hearty borscht and pierogis since 1954. But, truly, it’s their latkes that are a standout for Chanukah. Dense and packed with potato flavor without any trace of greasiness, Veselka latkes have mastered the art of the potato pancake. You can sit outside in one of their private booths with heat lamps or join the party spirit indoors with the cool kids. 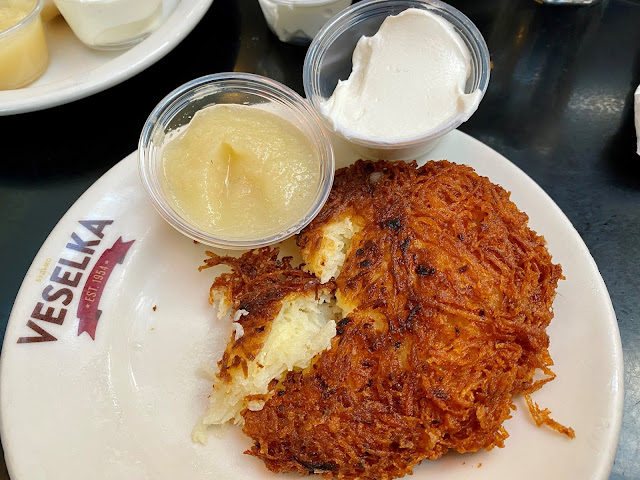 Light your Menorah and then then head to the Upper West Side to the new Levantine restaurant Dagon from Chef Ari Bokovza. The pandemic-be-damned restaurant is serving up fresh grated potato latkes with a choice of three creative sides for their first Chanukah meal. Have it your way with a choice of horseradish-za’atar yogurt, smoked salmon, silan (date) and ginger apple sauce, pastrami-spiced short rib marmalade, harissa ketchup, tahini-amba (pickled mango), roasted bone marrow or American paddlefish caviar.

Well-known among NYC’s power brokers, The Regency Bar & Grill on Park Avenue welcomes all with its Festival of Lights celebrations for lunch and dinner. Spice up your meal with classic Matzah Ball Soup and Carrots or a stack of potato latkes as you discuss the fate of the world and NYC business. 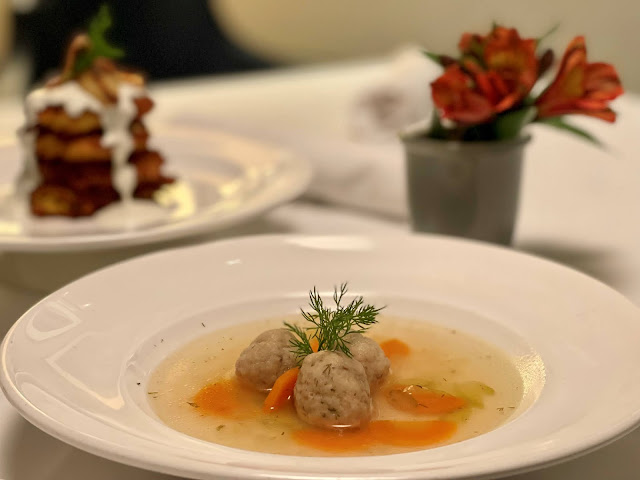 Star of Israeli-Persian-Yemenite dining at her Meatpacking District restaurant, Chef Einat Admony has added holiday specials to Balaboosta’s menu. You can order Sufganiyot, the Israeli jelly donut staple of Chanukah, here filled with savory chicken liver mousse and topped with a sweet amarena cherry compote. Additionally, try the Zengoula, a fresh Middle Eastern take on Chanukah sweets. The crisp funnel cakes are made with rose water, saffron honey and pistachio.

Delis are a no-brainer when it comes to finding latkes on the menu year-round. Steve and Eugene Slobodksi’s PJ Bernstein on the Upper East Side has one of the best choices with more than half century of experience. Served up with apple sauce or sour cream, the latkes are delicious and worthy of ordering a bunch to go to freeze for the week. I’d prefer that you ignore the sour cream and just let the potatoes and apple combination work its magic.

The Second Avenue Deli may no longer be located on Second Avenue, but no matter, this is the real deal when it comes to deli dining and especially latkes. The latkes at their two locations on the Upper East Side and Midtown have been perfected over the deli’s 65-year history and it shows. They’re crispy with no trace of oil. The deli even uses them to create a crazy sandwich worthy of sharing, the Instant Heart Attack: it’s a mountain of a creation with corned beef, pastrami, turkey or salami between two latkes. I’m not sure that apple sauce would work with that.

This upstart restaurant featuring a mashup of styles and nationalities is offering latkes for their inaugural season. Indeed, Chef Joel Reiss’s latkes continue the inventive theme with Scallion Latkes turned into a meal with braised short rib, horseradish sour cream, natural jus and chive oil. For a sweet spin on a beverage to accompany, the Who’s Jac W.? sangria is made with Manischewitz wine, brandy, apple pucker, berry syrup and cranberry juice. 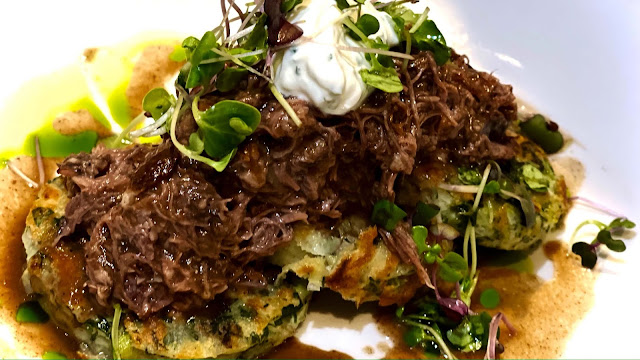 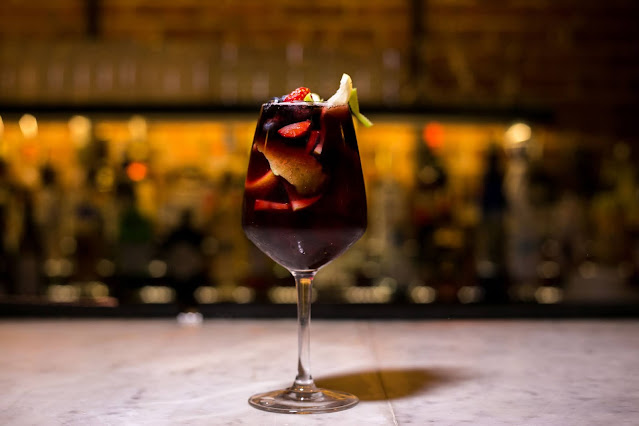 Brisket is the name of the game at this Mediterranean fast-casual eatery at Rockefeller Center. After a day of skating or watching the light spectacular on the façade of Saks Fifth Avenue, head indoors to Samesa to warm up with this rib-sticking version made Mediterranean-style with apricots, dates, leeks and oranges as well as the usual holiday root veggies. 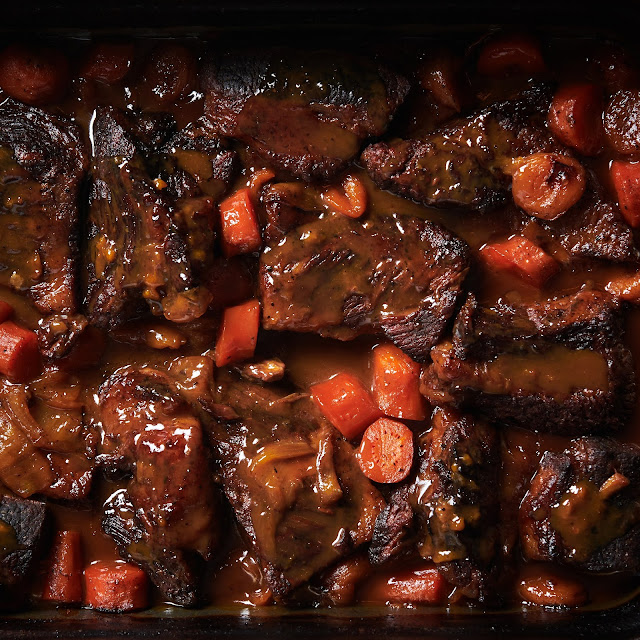 Technically, Butterfield Market isn’t a restaurant – it’s where you order your takeout to create your at-home “restaurant.” Lucky for us, Butterfield Market doesn’t restrict selling their fabulous latkes to Chanukah. The light and golden potato pancakes are a tad on the pricy side but they’re worth it. And Butterfield’s homemade apple sauce is truly a thing of gastronomic beauty. Be sure to order a large portion of that as well, as you’ll want to eat it by the spoon even after you’ve finished all of your latkes.

The acclaimed Prospect Heights restaurant from Chef Greg Baxtrom is offering a Giant Latke at their popular weekend brunch. Each Giant Latke is served in its own cast iron skillet and is topped with lemon crème fraiche and trout roe, very much Olmsted-style and very much delicious. 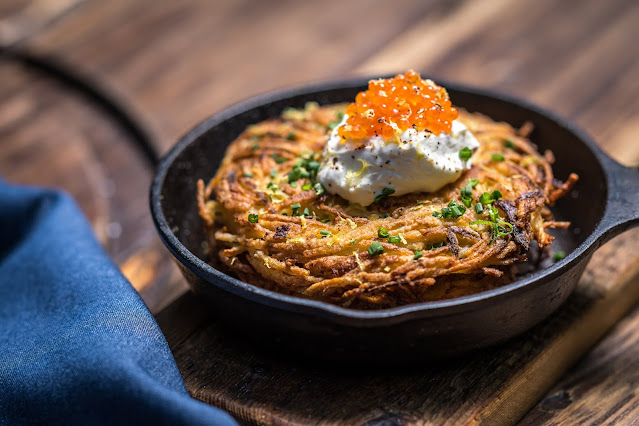 Combining a brunch staple with a Hanukkah twist, the Time Out Market restaurant-bakery entices you to Brooklyn with its rich Latke Eggs Benedict. Chef Neil Kleinberg poaches cage-free eggs, pairs them with house smoked salmon and adds a bath of classic Hollandaise sauce, all served over crispy potato pancakes. 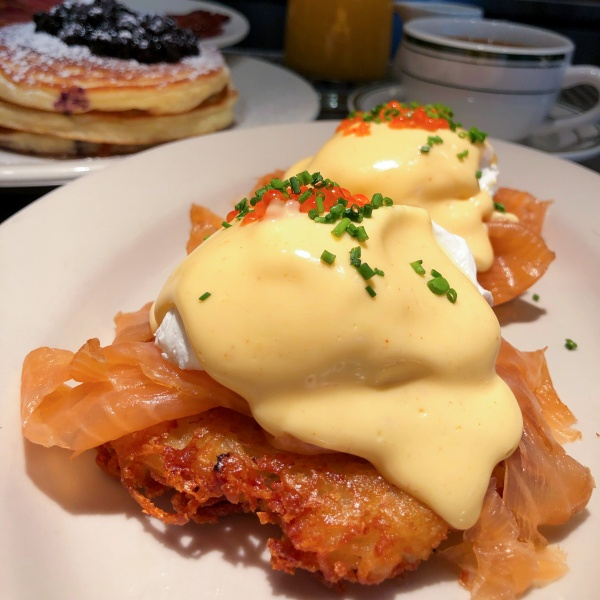