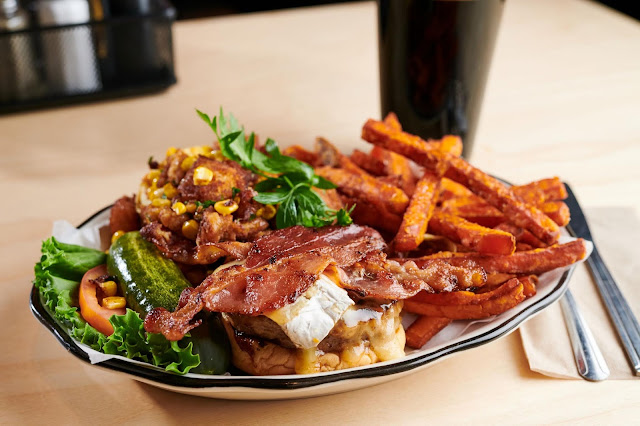 Thanksgiving dining in New York doesn’t have to be traditional. You can have an all-American turkey-with-all-the-trimmings version, or change it up with some international spice. Leave the cooking to the professionals this year – you deserve it – and choose from these 24 delicious choices.

The Standard Grill invites you to dine indoors or outdoors to observe an American Thanksgiving dinner, enhanced with the restaurant’s seasonal favorites. You’ll love Chef Jean-Paul Lourdes’ traditional turkey with truffle stuffing, roasted root veggies and cranberry sauce. Non-meat eaters have of-the-season choices like roasted pumpkin ravioli with black sesame, or big-eye tuna Wellington with mushroom duxelles. Desserts stick to holiday favorites apple and cherry pies. You can walk off your dinner with a stroll along the adjacent High Line. 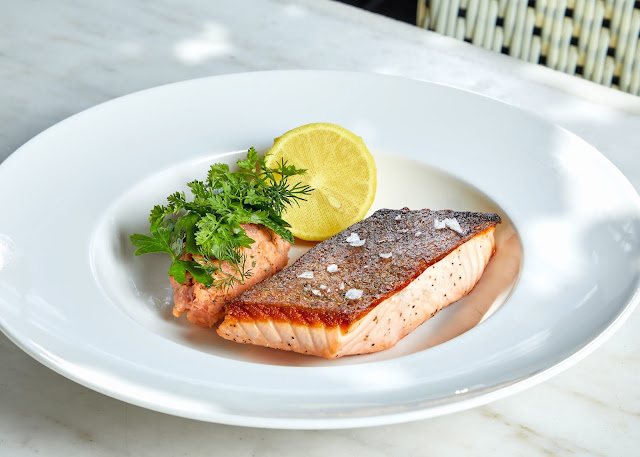 Also a short walk from the High Line, Michael Lomonaco’s Hudson Yards Grill presents a three-course prix fixe dinner built around holiday classics like butternut squash soup, roasted Lancaster County turkey with sage stuffing and sweet potatoes, and apple pie. If your preference for Thanksgiving is slightly less traditional, you can order Faroe Island salmon as part of the set menu or choose from the restaurant’s a la carte menu where a popular choice is Lomonaco’s oversized burger. 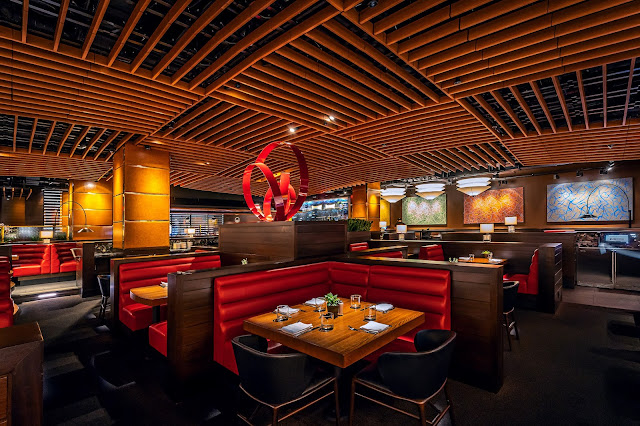 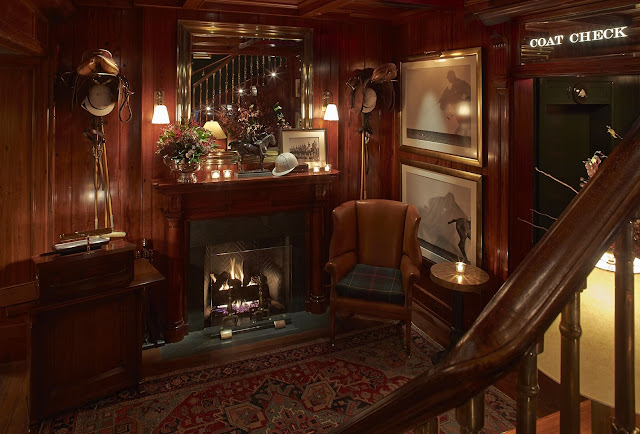 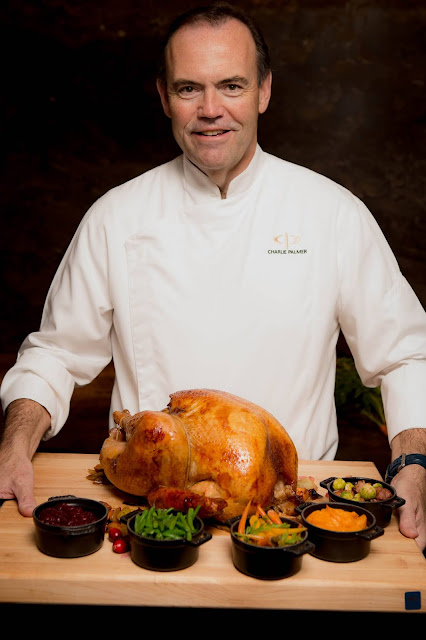 You might not think of a Korean steakhouse as a go-to for Thanksgiving Day, But Simon Kim’s feast will make you reconsider. The prix fixe menu is purely Cote, combining four select cuts of USDA Prime and American Wagyu beef (hanger, 45-day ribeye, flatiron, and galbi) with a variety of Korean accompaniments. Instead of the usual mashed or sweet potatoes, you’ll enjoy savory egg soufflé, Korean glass noodles, spicy kimchi stew and sticky rice stuffing with Chinese sausage ad shiitake mushrooms. For dessert, no worries. You’ll have ice cream as you should on Thanksgiving. Festive cocktails will be served as well. 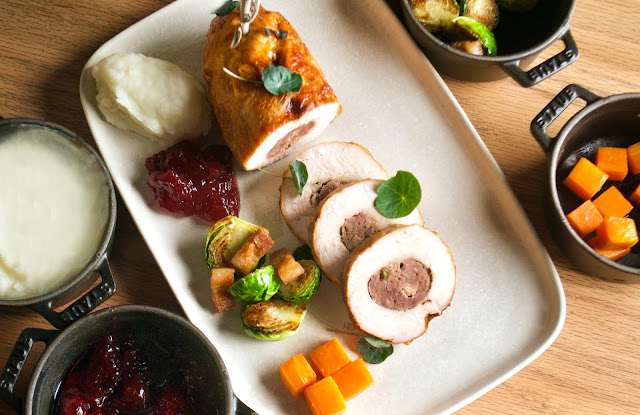 For Thanksgiving, Miss Lily's two downtown locations will offer a Jamaican spin on a traditional Thanksgiving meal with a three-course Caribbean feast. Enjoy a slow-roasted jerk turkey with rich gravy, stuffing, mac & cheese pie, and Jamaican greens along with a choice of appetizer (cod fritters or Caribbean pumpkin soup) and a choice of puddings for dessert (signature Miss Homey sweet potato or old-fashioned banana cream). You may not be on an island holiday, but you'll certainly feel like you are! 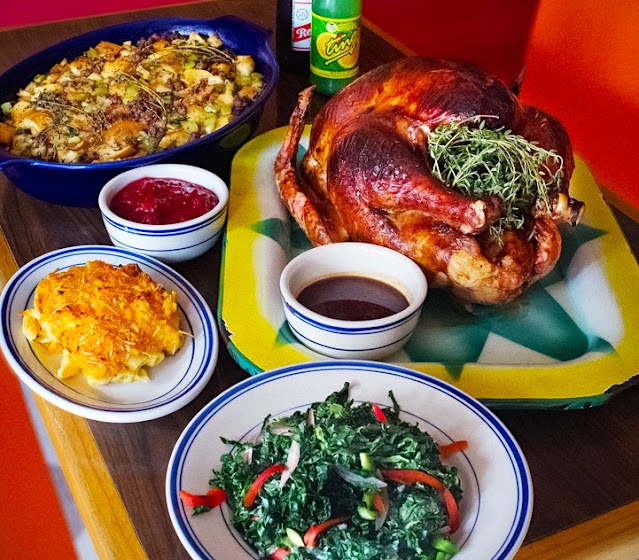 If you’re planning to hit the parade route, Victor’s Café  is an easy walk for a post-float celebration. Opening its doors when Santa makes his last foray down Central Park West, the 50-year-old Cuban restaurant offers Thanksgiving lunch, now provided by founder Victor Del Corral’s daughter and grandchildren. Located in the Theater District, Victor’s has a Latin-spiced meal in store with pavo asado, a traditional roasted turkey, spiced up with cornbread and chorizo stuffing. Add to that sweet potato mash and cranberry sauce to keep the American tradition, enhanced with Victor’s famous black beans and rice, and a dessert of flan de calabaza and you certainly won’t miss your usual pumpkin pie. And what could be more Latin than a mojito with your turkey? If you decide you need to thaw out a bit after the parade before you dine, dinner will be served until 10pm. 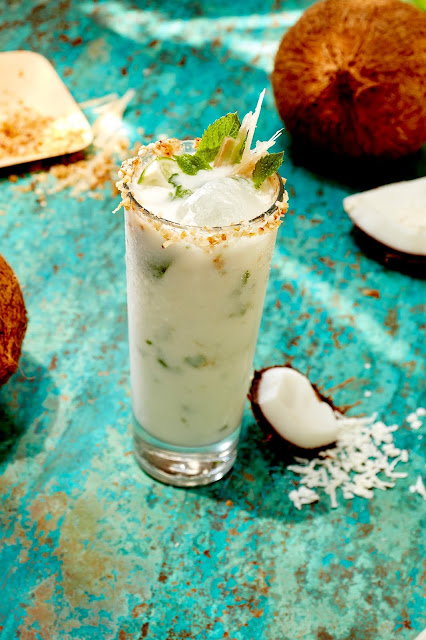 Located at Ian Schrager’s PUBLIC hotel, POPULAR introduces a special Peruvian-inspired Thanksgiving menu with Pisco cocktails. Created by Chef Diego Muñoz (Astrid y Gaston, Lima), the family-style set menu offers an Andean twist for the holiday with a crème brûlée-inspired take on a Pisco Sour, turkey cooked two ways (herb-roasted white meat and confit dark meat), stuffing made with mirepoix, and Chef’s grandma’s recipe for cranberry sauce. An exciting side, Peruvian-inflected Brussels sprouts are fried with an ají limo maple glaze and citrus zest. Dessert is one that can’t be found anywhere else in NYC: Peruvian chocolate and pecan pie with a salted crust and a side of lucuma ice cream. 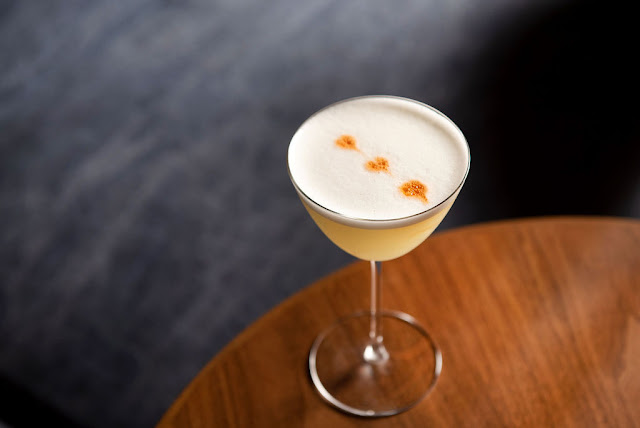 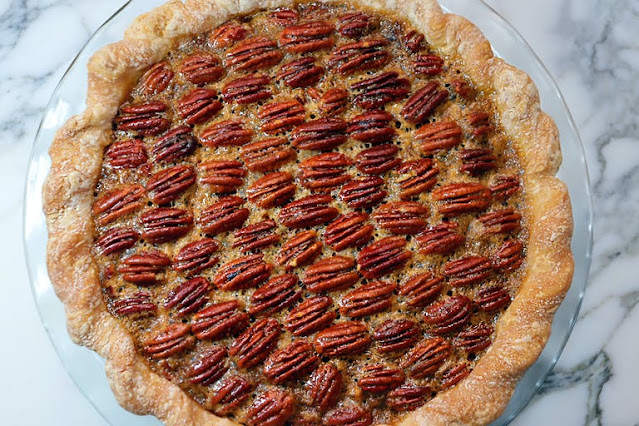 L’amico means friend in Italian and Chef Laurent Tourondel wants you to invite all of your friends and family for an Italian-influenced Thanksgiving dinner in the Kimpton Hotel Eventi. Diners can choose from a selection of appetizers such as crispy Parmesan sformato with prosciutto San Daniele and truffle vinaigrette or butternut squash soup with fontina agnolotti sage. Entrées entice with blends of varying flavors like the wood-fire roasted Heritage turkey with cranberry-orange mostards, oreganata gravy, chestnut, and pork sausage stuffing; or king salmon with Sicilian cauliflower, currants, pistachio, kabocha squash and balsamico. Sides are equally intriguing such as spaghetti squash with gorgonzola and pine nuts or Brussels sprouts with honey and guanciale. Pumpkin pie is tarted up a la dolce vita with a hazelnut crunch and amaretto whipped cream. 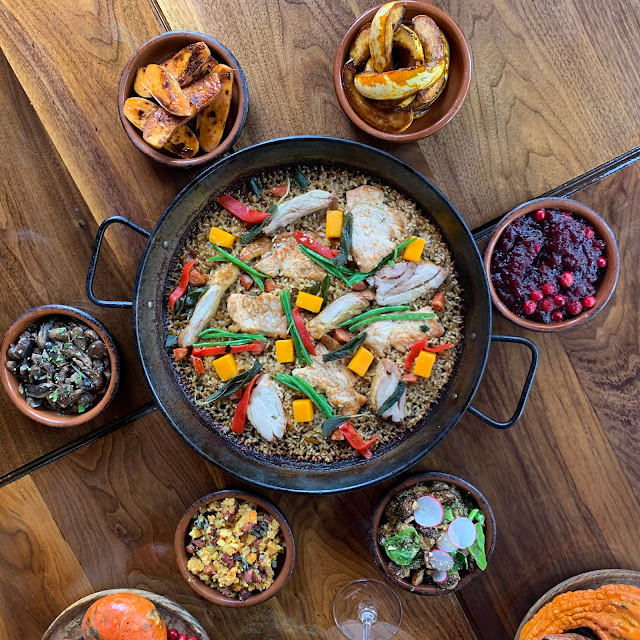 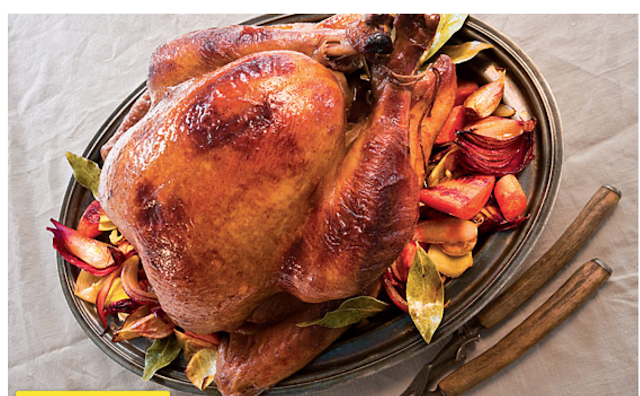 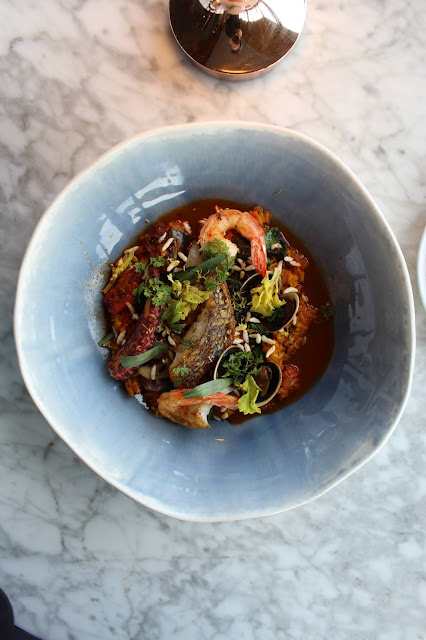 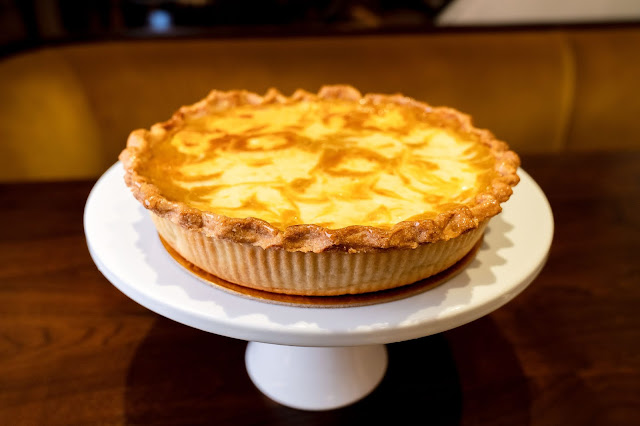 A Côte d’Azur-inspired three-course meal awaits at Fig & Olive on Thanksgiving. Classics like roasted rainbow carrots and sweet potato mix with Mediterranean and American dishes including French onion soup and Beeler’s pork belly. For the main course, meat eaters and vegetarians will enjoy a choice of free-range turkey or pumpkin risotto. Desserts blend the two continental influences with a choice of pumpkin Bundt cake or gateau au fromage. 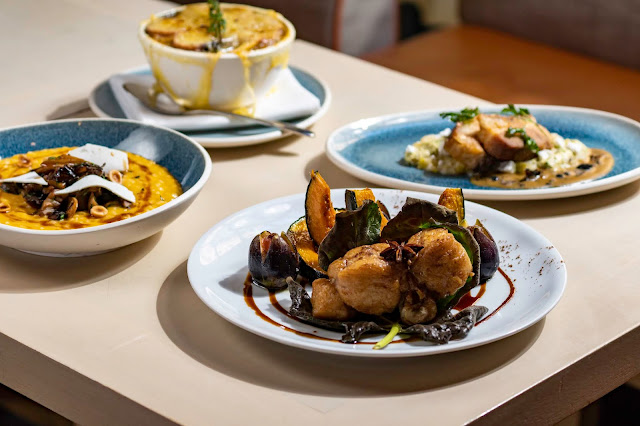 For a Mediterranean twist with views of Manhattan instead of Italy, Celestine is the place to be for Thanksgiving brunch and dinner. Traditional American ingredients like chicory and delicata squash mix with Mediterranean Castelfranco, Trevisano radicchio and Pecorino cheese. Meat eaters will enjoy turkey served as a roulade with fresh herbs and pan gravy while vegetarians can opt for wild mushroom tagliatelle. Other items on the menu span both European and American influences with pommes purées, sourdough stuffing, Parker House rolls, and a dessert choice of either apple galette with crème fraîche or pumpkin cake with spiced cream cheese frosting.

Nothing is more American than a meal at an old-timey diner, and for Thanksgiving the newly re-opened Old John’s Diner has a meal that is pure comfort food. For a mere $45 per person, you’ll get a three-course meal that also includes a glass of wine. The menu for the day features tortellini vegetable soup; roasted turkey breast with mashed potatoes, sweet potato mash, gravy and cranberry sauce; and a choice of apple or pumpkin pie for dessert. Sometimes simplicity is the sweetest thing. 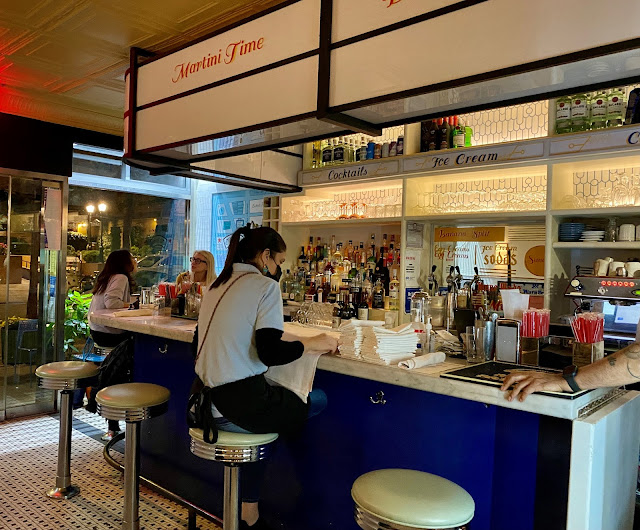 Curiously not located in Brooklyn, Brooklyn Diner gives Manhattanites a taste of the other borough with another affordable, traditional feast. For $40 per person, the all-American menu features a free-range herb-roasted turkey along with pecan pie. 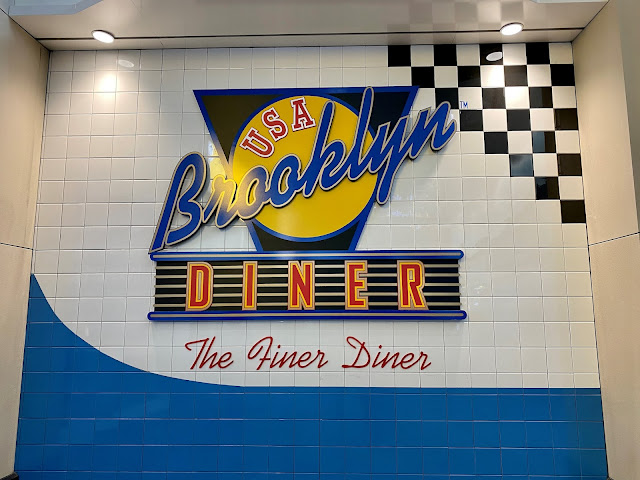 Helmed by acclaimed Chef Jonathan Waxman, Jams at 1 Hotel Central Park offers a comfortable way to watch the parade while indulging in a great Thanksgiving brunch. The restaurant’s floor-to-ceiling windows offer privileged indoor viewing of the floats and bands as they make their way down Sixth Avenue. Jams will be hosting a full day of Thanksgiving dining experiences including brunch and post-parade dining serving up both hot and cold buffets at each. Pretty much every sort of holiday and seasonal food is included from mini butternut quiches to roasted turkey and peppercorn-crusted ham and brunchy items like French toast sticks and pastries. If you have your heart set on watching the parade in situ, this is a fabulous way to do it. 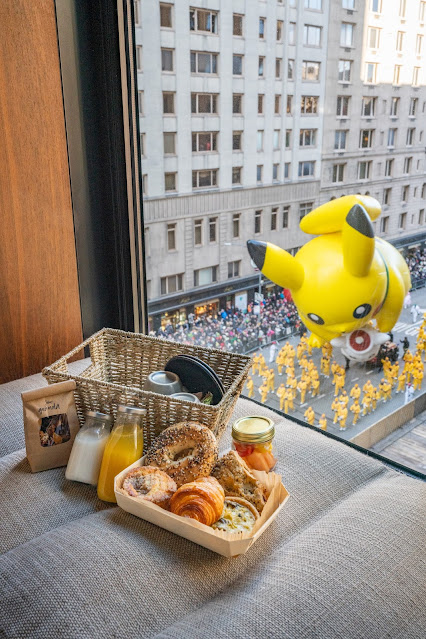 So turkey isn’t your thing but you want to celebrate Thanksgiving in a novel way? Then this one’s for you: Black Tap has created a new, crazy shake with all of the holiday flavors. The over-the-top Pumpkin Cheesecake CrazyShake® is a pumpkin-spiced shake with a vanilla-frosted rim with mini marshmallows topped with a pumpkin cheesecake slice, whipped cream and pumpkin spice. But don’t worry – if you’d prefer your shake as a dessert after something turkey, Black Tap’s Thanksgiving Burger (top photo) will certainly fit the bill. Almost as large as the shake, the turkey burger comes with Brie, Applewood smoked bacon, corn and sage potato roll stuffing, cranberry and orange aioli. 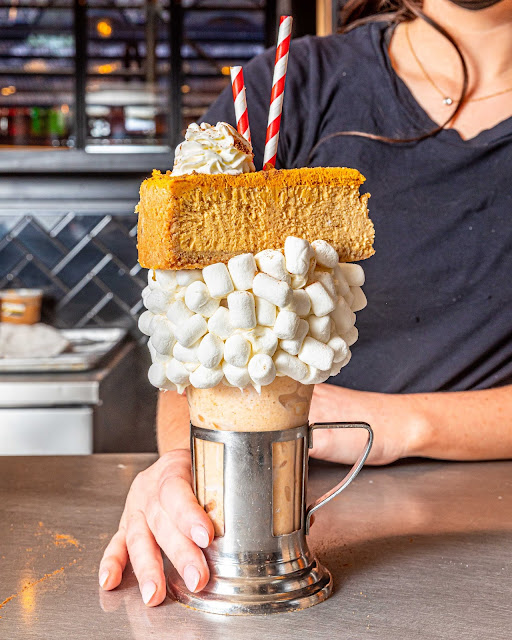 Everyone knows the best part of Thanksgiving is the leftovers. At Industry Kitchen, the team at this Seaport restaurant is reprising their creative twist on holiday flavors with their Thanksgiving Pizza. The wood-fired pizza combines the classic spread of turkey, cranberry sauce and stuffing to create a dish that balances the sweet and salty flavors of Thanksgiving. The happy news? It’s available through the entire month of November. 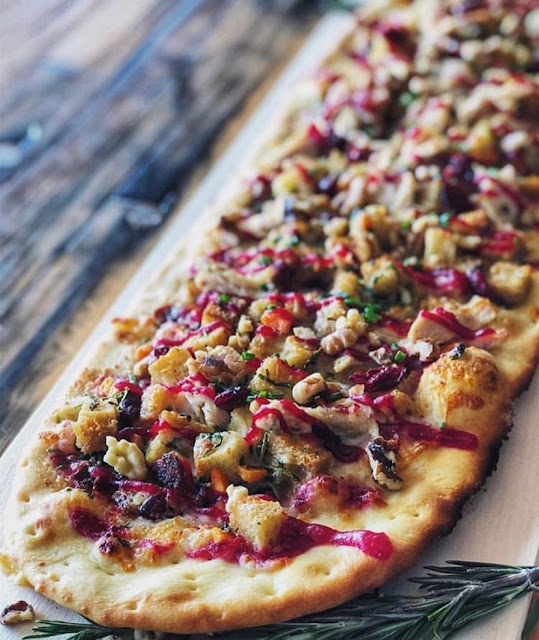