Don’t Miss The Metromaniacs, Closing May 20 – A French Farce in Meter by David Ives 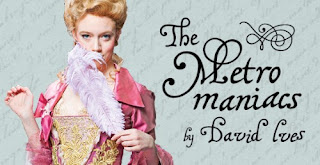 You have only four more chances to see this romp of a literary farce on Broadway. Meter, rhyming, deceit, and fantasy all play into The Metromaniacs whirl of a show where nothing appears as it truly is. Scheming, mistaken identities and assumed personas play into the lovefest where the ultimate goal is to connect with one’s true soulmate. Set in Paris, 1738, verse- and poetry-mania have created an affinity among residents for couplets.

I don’t want to spoil the intrigue but suffice it to say that you’ll need to pay attention to the goings-on here in much the same way as you’d watch a Shakespearean comedy.

If you enjoy fast-paced language-dependent theater, you’ll have a great time. And the interspersing of current language idioms with 18th-century rhyming and cadence adds to the literary witticism and pleasure. Language nuts will have a field day!

Original Baroque music by Adam Wernick. Gorgeous costumes by Murell Horton. And the wonderful script by David Ives (Venus in Fur, The Liar, All in the Timing).

Instead of a pre-show glass of wine, have an espresso and get ready for a literary tour de force.