Broadway Ramblings: Easter Bonnet Competition, Broadway Cares, and Where to Eat in the Theater District


For Broadway nerds like me, The Actor's Fund and Broadway Cares/Equity Fights Aids are important organizations, providing much-needed health and other services to the Broadway community.

At this year's recent Easter Bonnet Competition, the casts of Hamilton and Dear Evan Hansen performed a brilliant version of "Together" as an ensemble, as their entry into the competition. The competition raised $5.8MM for this worthy cause. Thank you to the members of the Bucket Brigade who help collect donations at the theaters. And to presenters Nathan Lane, Bernadette Peters, Victor Garber, and Andrew Garfield (in photo). 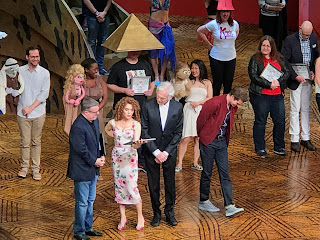 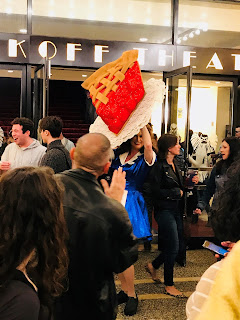 
And, if you're looking for some nearby places to eat -- here are a few to consider:

Opry City -- at 47th Street and Broadway, a four-story tribute to Nashville and country music with a two-floor restaurant, two music stages, and a shop.

Junior's -- expanding their Broadway cheesecake and deli empire into a mega-space at 49th Street and Broadway. The original Times Square location is still on 45th Street between Broadway and Eighth Avenue.

Tender Steak and Sushi -- in the Sanctuary Hotel, a polished loungey restaurant offering up solid Asian and American fare. There's also a bar where you can dine on a more casual menu. 47th Street between Broadway and Sixth Avenue.

Haven Rooftop -- also in the Sanctuary Hotel, a year-round rooftop bar and restaurant that's in high demand, particularly during the warmer months