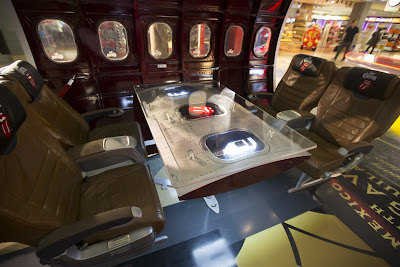 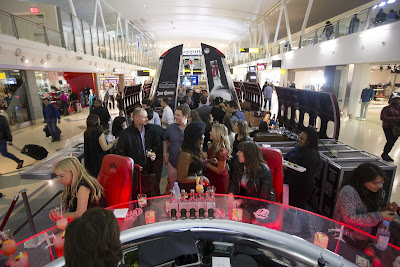 From now through December 30, you can actually get what you need, and a little satisfaction, too, if your travels take you through John F. Kennedy International airport.  Make a point of stopping in the retail area of Concourse A at Terminal 4 to visit the pop-up Jose Cuervo Rolling Stones exhibit.  Air Hollywood, a firm from California noted for creating airplane replicas and sets for the film industry (think, Kristen Wiig on that wonderful airplane scene to Las Vegas in Bridesmaids or the planes used in Wolf of Wall Street and Money Ball) has created a replica of the tour plane used by the Stones on their 1972 “party plane” North American Tour, set in an area covering 1500 square feet at the airport. At that time, it was Mick Jagger who reportedly asked for a tequila shot but was served a tequila sunrise instead. Mick was enamored of the orange juice, grenadine and Jose Cuervo creation and it became the drink of the tour, later dubbed the Tequila Sunrise Tour. And thus the drink’s fame began.

At this replica plane, you can try a sample of Jose Cuervo Especial between 2:30pm and 8pm, and sit around a bar that looks remarkably like the one on the Stones’ plane. There are also exhibits, Guitar Hero, and the leather seats that the Stones and their music crew sat in on their memorable 1972 tour. The seats also have the immediately recognizable lips logo. You can tune out the noise of the airport, as well, as Stones songs are playing non-stop. You might actually be happy that you have a layover.  #CuervoSunriseTour 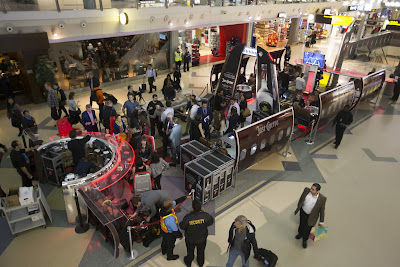