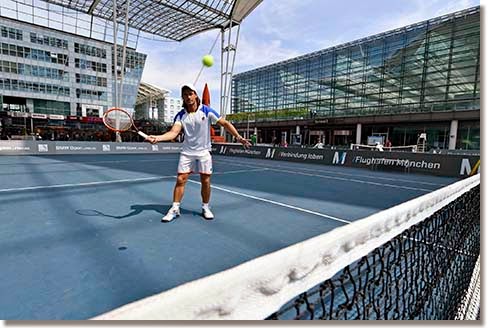 Have you ever thought about playing tennis at an airport, either during a layover or as a specific destination? Through April 20, tennis buffs can test their skills in the MAC Forum at Munich Airport. In the lead-up to the 2015 BMW Open, players of all ages and skill levels are invited to compete in the unique setting between the two terminals.

You have a choice: watch the excitement or be part of it. The BMW Open by FWU AG happens soon and some of the tournaments here will pit likely BMW Open participants against each other. In addition, there will be two courts, training camps for kids, open courts for anyone who wants to play (passengers and visitors alike).