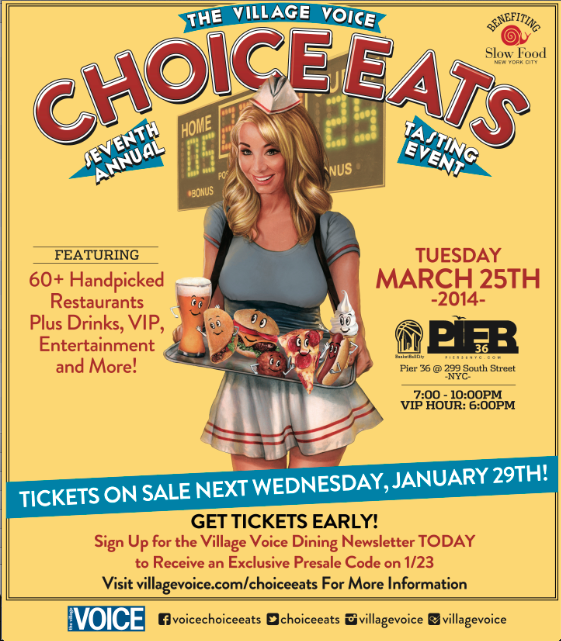 Since this is the seventh event, you know it’s going to be a lucky one!  Prepare. Don’t eat for several days prior. The location this year is new (not the 69th Armory as in the past): Basketball City at Pier 36 in Lower Manhattan (299 South Street). Three hours of eating from 7-10pm, with a VIP-only hour from 6-7pm. Tickets are $60 for General Admission, or $85 with the VIP sign-up.

New this year, "Choice Eats" will be accepting volunteers to assist The Village Voice team on-site at the event. In addition, to free entry to “Choice Eats,” this is a pretty cool way to get a free general admission ticket to The Village Voice's Third annual "Choice Streets" Food Truck Tasting Event to be held later this year in May. To apply, you must be 21 years or older and fill out this application, http://bit.ly/CEvolunteer.

Two other events happening in the NYC food scene this week:

23rd Taste of the NFL at Brooklyn Cruise Terminal
Held in Red Hook (Brooklyn) at “heated” Pier 12, the Taste of the NFL is holding its annual party, with lots of celebrity chefs fêting their favorite NFL team, each with a special dish. This year’s event – no surprise – is being held the night before the Super Bowl.  As a nod to the Super Bowl’s straggling both New York and New Jersey, there will also be a special appearance this year from cast members of TLC’s “Cake Boss.” Proceeds go to local food banks in NFL cities. 72 Bowne Street, Brooklyn.