Let It Be: A Fun Evening of Pretend Beatles on Broadway (and around the world, soon)

And while I'm on the topic of non-theatrical Broadway experiences (see previous post), here's another show that's good for an evening of rock 'n roll. But you'll need to hurry if you live in NYC, this show is ending on September 1 in preparation for an international tour. 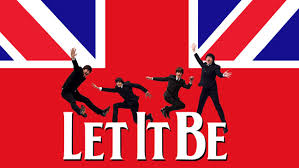 If dance isn’t something you’d like to watch but you’d prefer to do, then “Let It Be” might be more suited to your taste than "Forever Tango." Suspend belief for two and a half hours and you can almost imagine that the Beatles are really on stage at the St. James Theater, as the four performers (and one guest director) take the audience through a musical chronicle of the Beatles’ famous hits.  Some of the songs are better performed than others, and you might have a debate amongst yourselves as to which Beatles impersonator is actually the truest, but no matter, you’ll have a fun time twisting and shouting all the way to the finale.  Come early to watch the 1960s television commercials and answer the Beatles trivia questions shown on the monitors.  Throughout the theatrical concert, actual video footage from the Beatles' travels to New York is interspersed with other shots of the time.  http://www.letitbebroadway.com/ St. James Theater, 246 West 44th Street. Tickets: www.telecharge.com, 212-239-6200.
Email Post
Labels: Beatles Broadway concert Forever Tango Let It Be theatrical concert