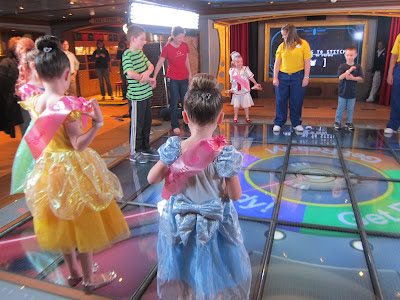 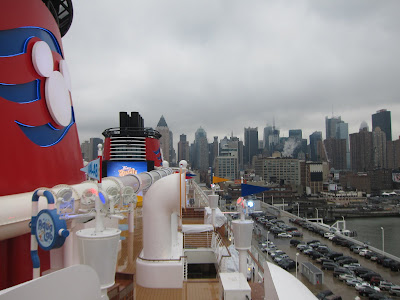 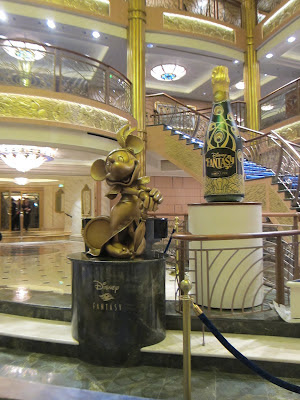 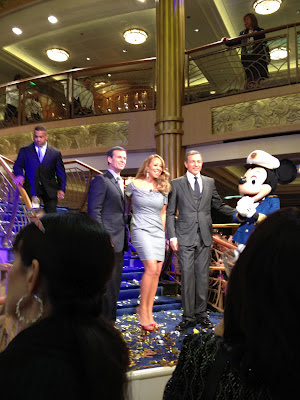 Disney has done it again. The new Disney Fantasy cruise ship, which made a christening stop in New York City after its transatlantic crossing from Germany a month ago, will begin service from Florida today. Although we were wowed by the inaugural evening with appearances by Mariah Carey (who christened the ship), Neil Patrick Harris and Jerry Seinfeld (who introduced the evening’s frivolity), Mayor Bloomberg, and cameos by Allen Cummings and Nancy Grace (remember, Dancing with the Stars from last year?), it’s the ship itself that elicited the oohs and ahs all night long. How about an entrance into a 1920s-30s Art Nouveau-inspired lobby with an oversized statue of Minnie Mouse, cast in bronze and perfect for the quintessential Disney souvenir photo, or a giant multi-color glass chandelier.... for starters?

The Imagineers have really outdone themselves. There’s an interactive Muppets Mystery quest that leads you throughout the boat as you look for clues to solve one of several mysteries. The game studio will have you dancing over light beams on the Magic PlayFloor and engaging in on-screen banter with Stitch of Lilo and Stitch fame. Imagination becomes reality when little ones are transformed into princesses and pirates at the Bibbidi Bobbidi Boutique and The Pirates Boutique. And, of course, there are lots of Disney “characters” strolling through the boat to surprise you at any given moment. Care for a dance with Donald or a moment with Mickey? My favorite? My role as part of the Midship Detective Agency to search out the Muppet bad guy.

The dining room that will capture your imagination is the Animator's Palate, where your own black-and-white stick figure drawing comes to life as part of a musical revue on the restaurant’s walls. Think Fantasia set to dinner. The entire family will also enjoy two new Broadway-style shows, "Wishes," about best friends, and "Disney's Aladdin -- A Musical Spectacular." When it's time to escape the kids, the adults have Europa, a series of bars and venues themed around four European countries.

During the day, the outdoor deck has many options for water and play entertainment for all ages. Older kids (and adults) will love the basketball court, miniature golf, and the AquaDuck, a 765-foot-long water coaster. There are water play areas for younger kids at the AquaLab, and a private pool area for adults known as Satellite Falls. There’s plenty of shade, too, to protect everyone on some of the longer ocean-crossing days.

The 2500-passenger Disney Fantasy sails from Port Canaveral, Florida on two seven-day itineraries, one including St. Maarten and St. Thomas, and the other visiting Grand Cayman, Costa Maya, and Cozunel. Both visit Disney's own Castaway Cay in the Bahamas for a day of barbeque, water sports and spa. Cruises are scheduled year-round. For those of us in New York City, now that we've had a taste of having a Disney cruise ship in port (it was quite a sight to behold on the Hudson River), we want more. There will be 2-day cruises to nowhere -- a perfect Disney cruise sampler -- starting this summer, as well as longer sailings to Canada and the Bahamas on the Disney Magic.