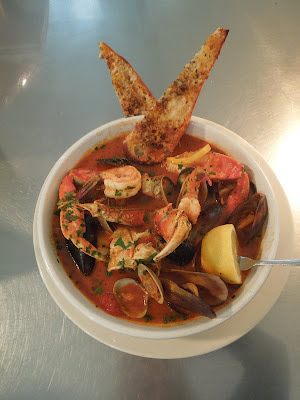 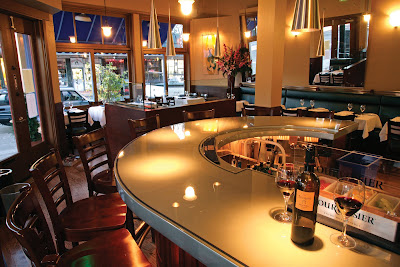 Travel and Food Notes welcomes fellow foodie, David Andrusia. David is a writer and career consultant in San Francisco. The author of BRAND YOURSELF (Random House) and THE PERFECT PITCH (Time-Warner), he helps folks realize their career potential even in these tough times.

A weird winter by the Bay to be sure: one day we're chilled to the bone, the next we're in shirtsleeves. Much as we'd like to think otherwise, there are still plenty of cold and rainy days ahead of here in San Fran; whether you're a local or visitor, you'll want some stick-to-the-ribs fare on blustery days. These are the places we head to when a nip is in in the air:

Garcon! 1101 Valencia Street
Fab food, a hugely talented chef, and gorgeous French waiters don’t exactly have us heading for the hills. Mais non! Garcon!, a deservedly long-running star in the trendy constellation of upper Valencia Street , is deservedly packed; when all the fads have come and gone, its French bistro fare that keeps us in thrall. Chef Arthur Wall is a New Orleans native who kisses Gallic classics lightly yet masterfully with Southern touches. Case in point: his Rabbit &Biscuits starter, with braised rabbit gravy and pearl onions, a starter for the ages that takes the wind of the traditional chicken dish’s sails. The 38 North Duck Breast & Confit is an organic, locally raised bird whose breast is perfectly pink and leg is confit-crisp; the heart and liver “dirty rice” is a Southern mainstay gone mod. Craving Steak Frites? Don’t resist: the marinated and grilled hanger steak is adorned with truffle butter and perfect fries. The seasonal sorbets are tad less tart than we like, but the deep-fried burros—a culturally correct nod to the Mission milieu—leave the beignets of Chef Wall’s hometown in the dust. A full bar, spirited scene, and cozy décor in Bordeaux hues on a blustery night? Oh, yes: Garcon! had us at bonjour.

Anchor Oyster Bar, 579 Castro Street
Full disclosure: this is the first dish I head for when I get off the plane, regardless of the season. But especially in winter, the cioppino at the long-running (32 years!) Anchor Oyster Bar has few peers. This San Francisco-originated dish is at its best at the convivial Anchor, whose bar is the perfect spot for solo diners. The cioppino here: a piping-hot bowl of tomato-based broth, kissed by star anise (the only secret ingredient I can share) and well-nigh overboard with fish of all stripes: market-fresh white fish (cod, halibut, or sea bass), Manila clams, green lip and Mediterranean mussels, prawns, and crab. Enough for two? You bet, unless I’m the other diner, in which case it’s all hands on your own deck. Dr. Atkins frowns, but we can’t resist the garlic bread—crusty on the outside and drowning in roasted garlic butter, parmesan cheese, and herbs. Traveler’s advisory: go early, as this is the first dish to leave the chalkboard menu of this very popular spot.

Alexander’s Steak House, 448 Brannan Street
The ever-burgeoning China Basin district has, against all odds, become a gastronomic haven—and Alexander’s has helped lead the charge. The post-industrial space is large but not unwieldy; its exposed brick side wall imparts a cozy air amid the chic. (Kudos to the sound designer who keeps things lively but not past easy conversation level.) Kindai sashimi as starter comprises oh-so-fresh bluefin, trout roe, and sudachi, a perfect light starter; we also couldn’t bypass the charred octopus in a neo-Asian sauce or the seared Hudson Valley foie gras—cooked just past pink—with chanterelles in yuzu buttermilk foam. The “not steak” section includes Maine lobster with Hokkaido uni risotto and Katsuo sushi: a smallish portion, but masterful as cultural counterpoint. Oddly, the much-ballyhooed “Perfect Porterhouse” wasn’t: it had been left to cool a bit too long (to room temperature, really) so that the black garlic persillade cloyed. Similarly tepid were the otherwise successful truffled French fries; an iceberg salad with Point Reyes blue cheese, smoked bacon, eggs, and Fuji apple was as sublime as it sounds. Cheese? A must, especially the Brie Royal aux Truffes from France. Pricey, yes, but peachy: despite a few missteps, Alexander’s astounds.
Email Post
Labels: San Francisco winter dining