Paris Remembers 9/11 with Events near the Eiffel Tower 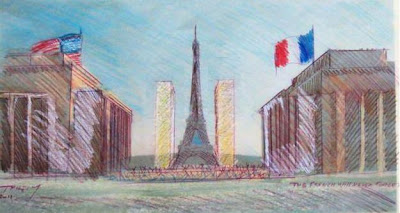 On September 11, the grassroots organization the French Will Never Forget (TFWN), offers their own commemoration of the events of 10 years ago, with a strong show of support by the French for their American allies.

Of particular note is the unveiling of a scaled reproduction of the World Trade Center towers in front of the Palais de Chaillot esplanade, Place du Trocadéro in Paris. Each tower will be approximately 75-feet high and will be created by scaffolding wrapped in white tarpaulin. The first tower will list the names of the 9/11 victims. The second tower is a mélange of messages from across the globe, taken from the French Will Never Forget’s Facebook page.

To ensure that the country’s youth not forget these tragedies, 70 teens will open the day’s ceremony, carrying US and French flags measuring 30 feet by 60 feet, in a demonstration of global support. A message of hope will be conveyed at the towers’ unveiling with a performance by a French children’s choir and the orchestra of the Académie de Musique de Paris. Further showing American-French unity, three young American musical performers, flown in from the US, will also participate.

If you know of other tributes around the world, please let me know. I’d love to share them with you.