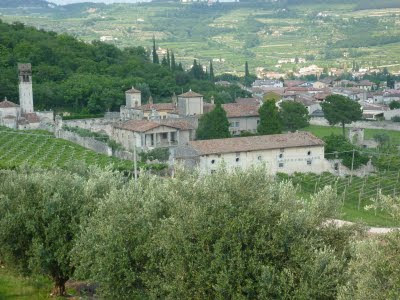 Travel and Food Notes welcomes Kathy Bechtel, Culinary Programming Director of Italiaoutdoors who is an expert at discovering new and interesting wines in Italy. Here she tells about one of her newest finds, Schioppettino.


During my visits to Italy on our Italiaoutdoors active culinary tours, I seek out any opportunity to enjoy a new wine, be it a tiny producer that we pass by on our bikes, or a glass of a totally unfamiliar varietal after a fun ski day. My new favorite is a varietal called Schioppettino.

Schioppettino, also known as Ribolla Nera, is a varietal from Friuli-Venezia Giulia, between the commune of Prepotto, near Udine and Slovenia. Like many of the indigenous grapes in this region, it was almost lost to us after the phylloxera epidemic devastated most of the vineyards in this region. When the vineyards were eventually replanted, growers favored the popular French varietals, turning their nose up toward the old local stalwarts. In fact, at one point the planting of Schioppettino was actually illegal, as it was classified as an undesirable varietal. Winemaker Paolo Rapuzzi searched out the few remaining vines, and through his efforts an EU decree was created to encourage the planting of Schioppettino, saving it from extinction.

The origin of the name is Schioppettino is unclear but often attributed to the fact that when bottled young and fermented in the bottle, Schioppettino became slightly sparkling, with "popping" (“scoppiettare” in Italian) on the tongue because of the carbon dioxide. This young bottling produces a medium-bodied wine with a fairly low alcohol content. More recently, Schioppettino is vinified in oak barriques, creating a more full-bodied and intense wine that is suitable for aging.

Following local tradition, the grapes are pruned in July, and then, close to harvesting, the leaves closest to the fruit are removed to maximize sun exposure. The harvested grapes are collected in wooden crates and left to dry until late autumn. Aging first occurs in wooden barrels and French barriques, followed by refining period in the bottle.

I’ve only just recently tried this wine in the US when I participated in the Italian Life Expo in Portland, Maine and sampled Vigna Petrussa’s own, from Prepotto, Italy. The wine is clearly becoming one of the rising stars in this relatively unknown, but highly respected wine zone. The Petrussa 2009 Schioppettino is a deep ruby red, decidedly cherry and berry on the nose. Its fruity palate is followed with a peppery spice, another “popping” on the tongue. As the flavors develop after opening, everything blends, and it presents a persistent pleasant smokiness. Try it with game, other full-flavored red meats, and hard cheeses.