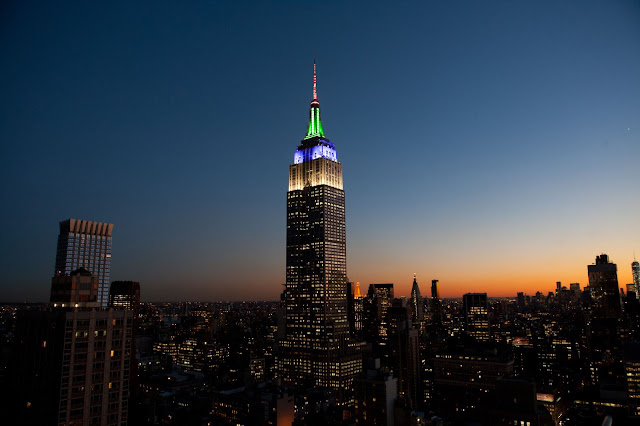 You don’t need to visit New York City this Halloween, nor even leave your home to have a true New York City trick-or-treat experience. This year, the Empire State Building is making its recognizable tower lights interactive for Halloween. On October 31 at 8pm, the iconic landmark takes Hasbro’s ESB Simon® memory game to new heights with a live game on the façade of Empire State Building. Your ticket to the fun -- without leaving your home -- is at www.Simon-Live.com where you can access the fast-paced game.

World-renowned production and lighting designer Marc Brickman and his team at Tactical Manoeuvre developed ESB Simon® using the world-famous tower lights as the pattern maker. You can prepare for the Hallow-IN event by visiting the website in advance to practice your skills to play.

So, grab your trick-or-treaters, costume up (yes, seriously) and enjoy a different kind of Halloween this year.

Here’s how it works:


·         Watch levels of the Empire State Building flash in an increasingly complex series of blue, green, yellow and red colors and tones. Tap the building to correctly repeat the pattern. The longer you play, the more complex the sequences.

·         For every correct answer, players climb further up the Empire State Building. Each wrong answer knocks you down. Your objective is to make it to the top of the building and the leaderboard. You can keep playing until the game is over.


·         If you’re lucky enough to actually have a view of the Empire State Building, you can both play AND watch the display live on the building.

Up to 100,000 people can play at once, and the game will be live on the Empire State Building from 8pm-9pm.
Need to brush up on your memory skills? Practice using Infinite Play mode ahead of Halloween night. But, unlike the Halloween game if you get one wrong answer in In
Email Post
Labels: Empire State Building game Halloween IRL SIMON Simon-Live.com trick or treat virtual