"Caesar & Cleopatra" Rules at Theatre One

Fine acting, a rarely performed play, and a story that moves from period to present are all drawing cards for George Bernard Shaw’s Caesar & Cleopatra at Theatre One -Theatre Row.  With so many Broadway offerings at big-ticket prices and often-limited availability, this show is a dream: the price is right, the actors are in prime form, and the storyline is intriguing. And it’s from the vaults of theatrical history dating from 1898.

In the intimate Theatre One, actors enter from a myriad of directions – from on stage, from above stage, and from the back of house.  You’re surrounded in what is akin to 360 degree staging.

The story is a progression of the development of Cleopatra, Queen of Egypt, from a child (a kitten) to a true queen (a lioness) through the guidance of Caesar. If the story sounds familiar, it’s one of George Bernard Shaw’s favorites: the tutelage of an ingénue to transform her into a diva.  The recent restaging of My Fair Lady was that story; Shaw’s Pygmalion-My Fair Lady hints at what can be expected in Caesar and Cleopatra.

Ftatateeta, Cleopatra’s nurse, is the first character onstage in a role that reminds one of Leading Player in Pippin. She explains what will transpire, she invites you the audience to participate, and she fills in the blanks while also acting her role. “You will help me. You will all help me. We will all dream together," she cajoles. And thus the show begins.

Next come a mélange of Romans and Egyptians, with a story of supremacy, aid and ultimate learning. Humor is interjected in places with characters like Apollodorus the Sicilian milking his heritage for all it’s worth and Cleopatra’s brother Ptolemy, the rightful ruler of Alexandria, depicted as an Avenue Q-like puppet. 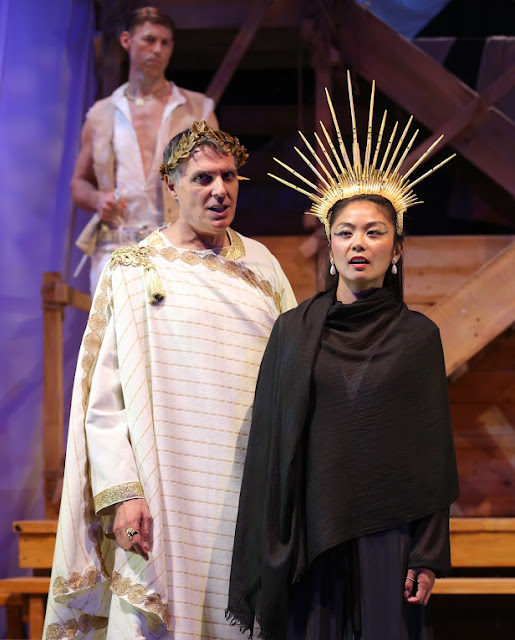 Produced by the Gingold Theatrical Group, Caesar & Cleopatra is a show that offers a peek into dominance, greed and power while also extolling the virtues of clemency and wisdom. The themes resonate today, without a doubt.  Director David Staller sums it up, “Caesar & Cleopatra reminds us of the vital importance of being an active part of our lives, of having the courage to make bold personal choices with the caveat that we take responsibility for those choices, and above all, to always leave our hearts open to discovery and to love.”