Two exciting exhibits are currently on view at the Metropolitan Museum of Art in New York City.

The first, “Play It Loud” is a must-see for anyone who fancies himself or herself a rock ‘n roll fan.  The exhibit consists of rooms and rooms tracing the history of iconic instruments of rock ‘n roll from 1939-2017 with many used by musicians like Chuck Berry, Eric Clapton, Jimi Hendrix, Elvis Presley, Joan Jett and Lady Gaga. While there are more than 130 instruments on display, the exhibit is not surprisingly guitar-heavy. If you’ve been curious about the origin of the electric guitar, the evolution of Stratocasters, and other guitar paraphernalia, the exhibit gives you more information than you’ve probably ever imagined. It’s all an interesting path through one of the most important artistic movements of the 20th century, and the videos with explanations of the power of guitar work and music by Keith Richards and Eddie van Halen add some real-life star power to the show. 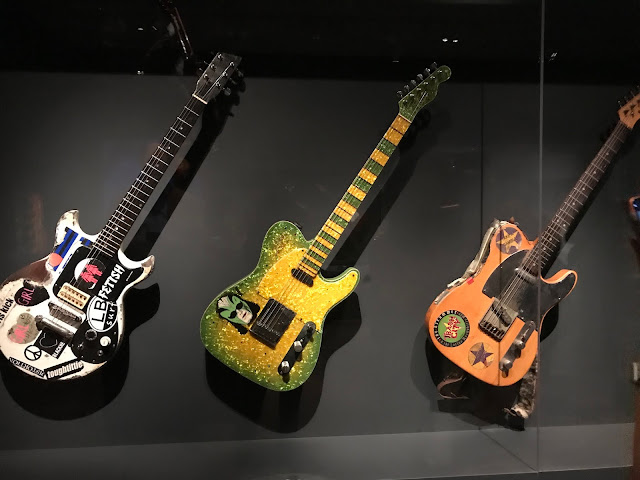 Music plays in each room, illustrating the time period shown.  In the first room, you’ll need to pause a moment to take in the actual Beatles drum set and guitars dating from 1963, a powerful trip down memory lane. Many of the display items representing instruments from more than 80 musicians are on loan from notables like Paul McCartney, so it’s a rare chance to see these up close. 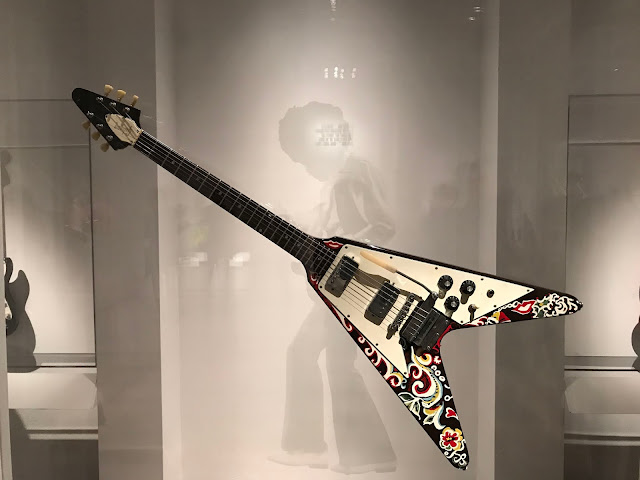 There’s a lot more than guitars, although the guitars on display are pretty fabulous. You’ll see costumes worn by Prince and Jimmy Page. There’s a sculpture made from pieces of the smashed remnants of Pete Townshend’s electric guitars, the purpose-built multi-neck guitars of Don Felder (The Eagles) and  Rick Nielsen (Cheap Trick), a Moog synthesizer customized by Keith Emerson along with his electric tone-wheel organ, an electric piano, and the pianos played by Lady Gaga on the Jimmy Fallon Show and a vintage gold-painted one played by Jerry Lee Lewis. Design fans will love the psychedelic hand-painted guitar from Keith Richards who admits to have painted it while high, St. Vincent’s personally designed guitar, Bo Didley’s red “Twang Machine,” the drums from Keith Moon’s colorful “Pictures of Lily” drum set and Jimi Hendrix’s notable “Love Drops” electric Gibson. 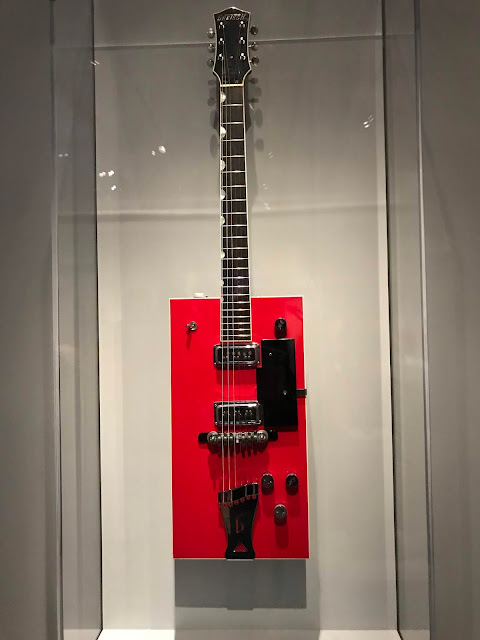 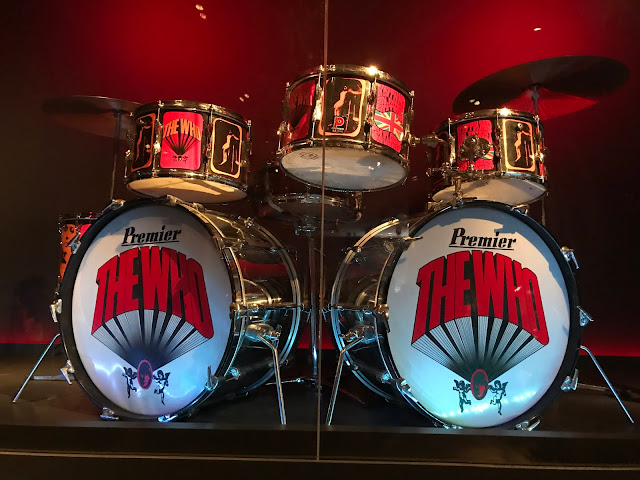 Concert lovers have a treat in store. The room of vintage concert posters spans the globe. It’s almost inconceivable that the Rolling Stones played Carnegie Hall and tickets cost a mere $3.50. Or that there was a concert with a lineup of The Who, The Doors, Jimi Hendrix, and the Rascals, all together at Flushing Meadow Park, again for only $3.50 per ticket. 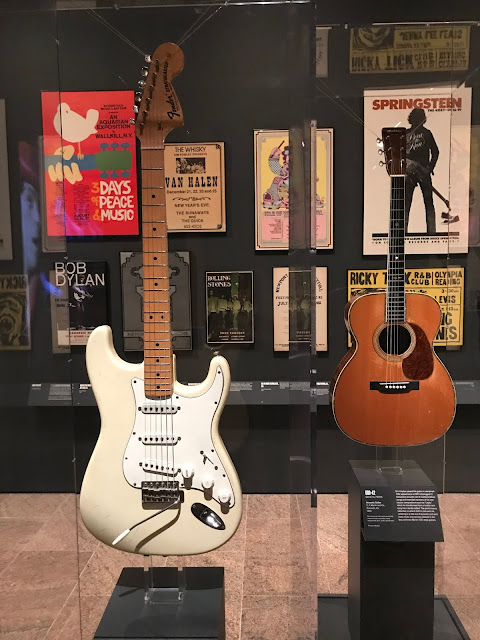 And, of course, there’s a room with footage of a variety of important concerts where you’ll want to soak in the atmosphere and stay and watch multiple times.

A special MetFriday evening celebrating rock and roll will include performances, talks, lectures, screening and workshops on September 13. I wouldn't want to miss that one.

Organized by The Met Museum’s Department of Musical Instruments and the Rock & Roll Hall of Fame, “Play It Loud” is the first major exhibition in an art museum dedicated entirely to iconic instruments of rock and roll.  “Play It Loud” runs through October 1.  #MetRockandRoll.

Before you leave the museum, head up to the Cantor Roof Garden where a new outdoor installation has just been unveiled. Named ParaPivot I and II, the massive dual pieces were designed by Alicja Kwade, a well-known artist from Berlin who exhibits regularly at Gallery 303 in New York City and has shown at exhibitions such as the Venice Biennale. 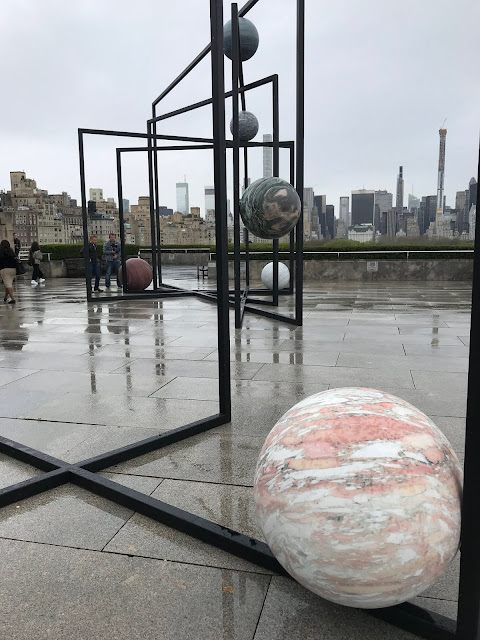 Set against the backdrop of Central Park and Manhattan’s Fifth Avenue, Central Park South and Central Park West skyline, the site-specific sculpture makes a dramatic setting for a day or evening out, particularly in the warmer months when the roof turns into a cocktail party in the evening.

As described by the artist herself, the installation is a consideration of the world, noting how “it’s amazing that we are a full world spinning on a ball.”  Thinking about that, Kwade added nine spheres as key elements to her powder-coated steel frames. The frames intersect at oblique angles, creating transparent boxes through which you can contemplate the world as well as the New York cityscape beyond. The placement of the massive globes on the frames gives the impression of looking at the orbital pathways of the globe. 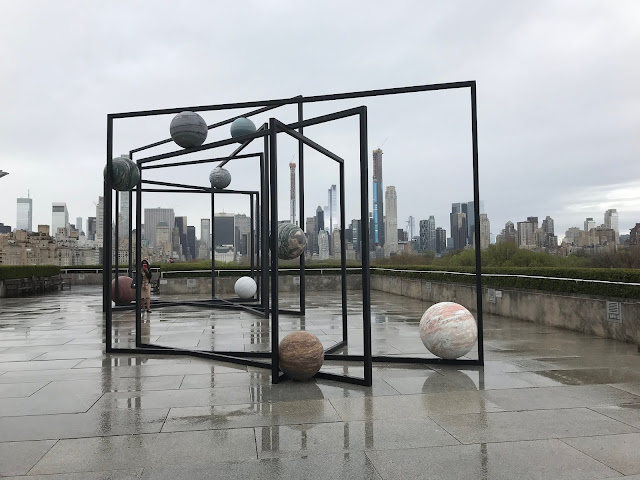 You have until October 27 to take a look.