Thanksgiving in Manhattan: From Traditional to International

If you’re like many of us, you might still not know where you’re celebrating Thanksgiving.  Procrastinators can relax – there are plenty of restaurants in New York City where you can enjoy a full celebration with or without turkey. And, because it’s New York City, there are many non-tradtional versions to sample as well.  So, don’t worry if you haven’t bought a turkey to cook yourself or if you missed the deadline to order from a catering house. Just watch the Thanksgiving Parade and chill; your Thanksgiving dinner awaits you at one of these wonderful restaurants.

MIFUNE New York, the progressive Japanese restaurant in Midtown East, is offering a very special Thanksgiving menu. Think turkey and sweet potatoes, of course, but with a Japanese/French spin to it.

Crafted by Head Chef Yuu Shimano (previously of Guy Savoy's eponymous three Michelin-starred restaurant in Paris), the menu is available on Thanksgiving Day with dinner seatings at 5pm and 8pm, and is priced at $90 per person. Add a wine or sake pairing for an additional $60 per person. 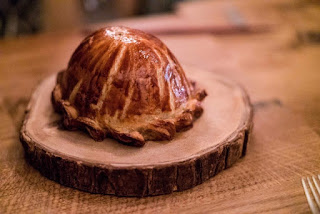 There’s still foliage to be seen at The Pandering Pig located in Upper Manhattan in Hudson Heights, overlooking the Hudson River. So hop the B train to 181 Street and explore a new part of the city as you enjoy a Thanksgiving dinner for the heart.

To accompany the meal, The Pandering Pig offers an expertly curated rotating wine program as well as a single malt whiskey collection and artisanal beer list.  And, in this very private, cozy restaurant, kids eat for half price on Thanksgiving. 209 Pinehurst Avenue, 212-781-3124, https://www.thepanderingpig.com/ 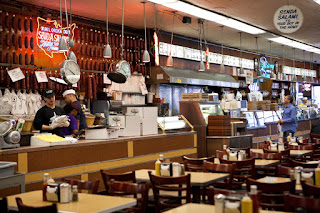 Katz’s Deli on the Lower East Side celebrates the holiday with their annual Thanksgiving dinner. From 5:30-8pm, it’s an all-you-can-eat-and-drink dinner that mixes American favorites with traditional deli treats. The turkey and mashed potatoes are a given. But have you ever thought to add Jewish specialties like tsimmes (carrots, dried fruits and root vegetables) or latkes (potato pancakes)?

Katz’s also lets you bring the meal home if you prefer to watch a football game indoors while you eat. Their take-out menu enhances the festivities with the likes of pastrami, noodle kugel and matzoh ball soup. The traditional turkey dinner (gravy, sides, stuffing, and more) is a given. But, in my opinion, it’s probably more fun to eat at the deli and look at the photos of all the notables who have visited there over years (in addition to Meg Ryan).  205 East Houston Street, 212-254-2246, https://www.katzsdelicatessen.com

Also downtown, Harold's is all about tradition and comfort with a prix fixe family-style dinner for $62 per person. The first course features a holiday antipasto followed by roasted turkey, Italian sausage, ham steak, green bean casserole, mashed potatoes, traditional stuffing and more. For dessert, Harold’s will be serving traditional pumpkin and pecan pies as well as apple cobbler and cranberry cheesecake. You may not be staying at the Arlo SoHo hotel where Harold’s is located, but you should definitely explore its public spaces before you leave: the courtyard has been transformed to mimic an apple orchard in the city with pick-your-own apples, hay bales, corn stalks and pumpkins for sale. 2 Renwick St., 212-390-8484, https://www.arlohotels.com/arlo-soho/eat-and-drink/harolds . 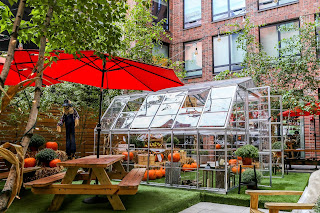 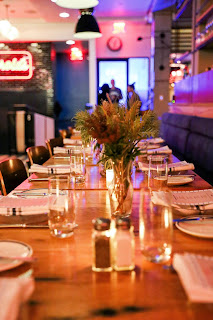 Feeling decadent? You don’t have to go to a restaurant or stay at home to enjoy the holiday. Instead, a staycation at The Plaza brings with it reserved-seat viewing of the Macy’s Thanksgiving Parade. Between November 21 and November 23, celebrate a quintessential New York Thanksgiving with two iconic institutions when you book the Carnegie Suite at this storied hotel. You won’t be “home alone” for long! 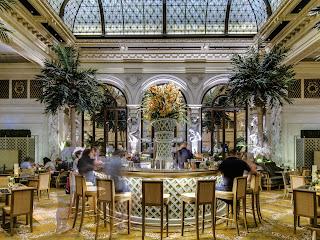 You’ll begin your day of decadence with breakfast in the Palm Court (or in your room, if you prefer) before joining the throngs with a Plaza thermos and blanket to keep you nice and warm (it’s supposed to be very very cold this year). You won’t have to worry about standing up among thousands of people watching the floats; The Plaza has two confirmed seats at the Central Park South bleachers for you. 768 5th Ave, 212-759-3000, http://www.Fairmont.com/ThePlaza
Dinner after the parade?  Well, you’re on your own for that. But first, take a holiday-inspired stroll from The Plaza down Fifth Avenue to look at the Christmas windows at Bergdorf-Goodman and Saks Fifth Avenue and to check out the skaters at Rockefeller Plaza (the tree’s not up until Wednesday, November 28 so plan to return for the tree lighting and live performances from 7-9pm). https://www.rockefellercenter.com/whats-happening/2018/11/28/2018-rockefeller-center-christmas-tree).