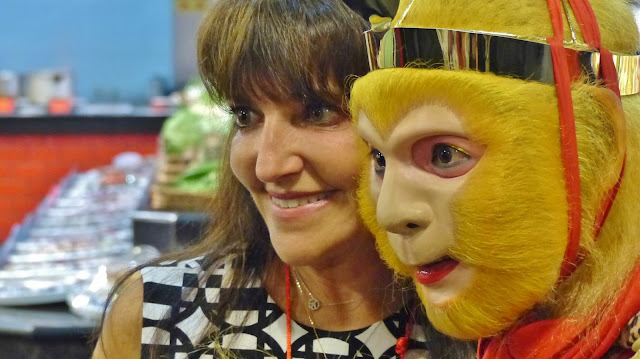 I tried my hardest to learn Mandarin. I spent two semesters at the China Institute in Manhattan, attempting to master the Chinese characters, learning the triad of tones, and trying to figure out ways to memorize strange-sounding words that had no cognates in the English language.

All this was in preparation for my trip to Mainland China. I had been to Hong Kong a few years before and loved it, but I wanted to delve into the cultural background of the mainland whose citizens were now exploring the world themselves.

I had heard that New York City and San Francisco had better Chinese food than what I would find in China itself. And I was curious to test that out as well. With Anthony Bourdain in mind, I set out on my voyage of experiences and eats.

My first stop was Beijing, a city so choked with people and cars that driving restrictions are imposed based on your license plate numbers (i.e., even numbers can only drive in the city on certain days, etc.) and country of origin. 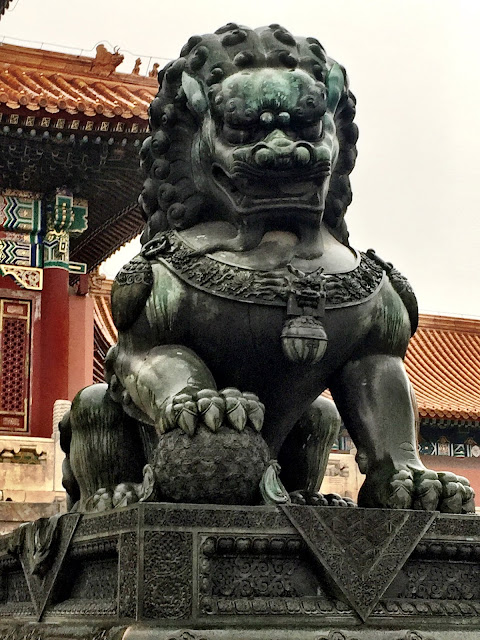 Unfortunately, my impression of the city was consistent with the news and air quality blasts that preceded the 2008 Beijing Summer Olympics (remember the iconic “Bird’s Nest” stadium shrouded in smog?). It also made me skeptical about why a decision had been made to hold the Olympics there a second time for the 2022 Winter games. The sky was a permanent shade of gray-white, marred by extreme pollution and inclement weather. And road travel was abysmal.

I refused to wear a mask as many do, however, and forged my way sometimes a bit breathlessly (and with a lot of patience) to take in the historic sites that are equally overwhelming. 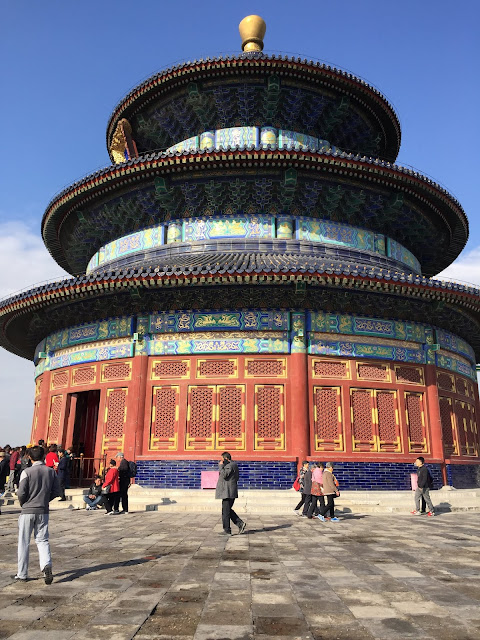 Culturally, Beijing is a rich city worth suffering the pollution and traffic. (Contact lens wearers, take note, this city can turn your lenses to pieces of saran wrap in minutes).  Tai Chi and dance groups in the parks reminded me of Chinatown in Manhattan with a population density that was equally daunting.

Heading to the Forbidden City, I meandered along walkways filled with people of all ages swaying, queuing, lingering and touring, all creating a loud buzz of enjoyment. You should plan to spend an entire day walking among the wooden buildings of the Forbidden City, admiring the lions that guard outside, and marveling at the yellow tiled roofs and the sheer enormity of the site. If you can avoid touring during the rainy season, you’ll be privy to the gardens as well, a welcome resting spot after walking the city. Leave time to explore the iconic Temple of Heaven, a marvel of Chinese architectural balance, and arrange for a guide to take you to the Summer Palace, another complex of amazing buildings, corridors and lakes. 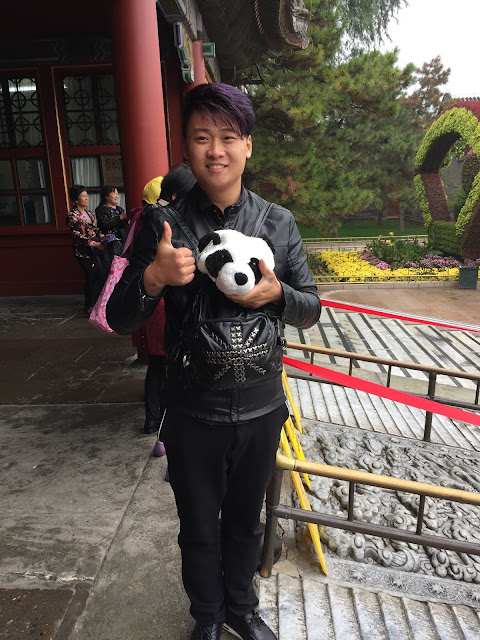 It rained heavily as I entered Tian’an Men Square, and the multi-colored raincoats and umbrellas added to the fun and energy. School groups mixed with tourists from around the world, all doing their best to stay dry and capture the perfect Insta snap. Considered to be the world’s largest public square, Tian’an Men Square is surrounded by more grand sites than I had time to see – The Great Hall of the People, the Qian Men Gate and the Forbidden City, my destination, among them. In the square, the children were especially intrigued by us, wanting to take photos of the funny-looking Americans who were constantly asking to take pictures of them as well. 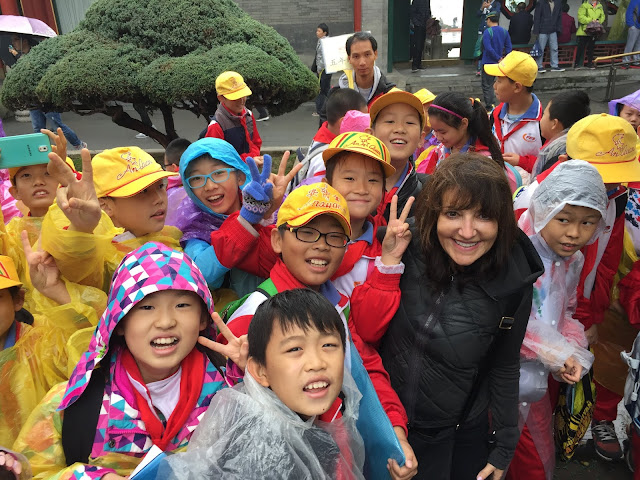 The food was vibrant, too, with lacquered yellow-gold Peking duck – the real deal here offered on lazy Susan’s at more casual family-style restaurants, or on elegant plates at my favorite dining choice, the original DaDong in Beijing. At DaDong, the roast duck is carved tableside by a master chef and presented with a variety of accompaniments, creating a regal feast. I can understand why President and Michelle Obama selected this restaurant to dine at – the elegance, gracious service, and delicious Shandong cuisine made for the most memorable meal I had in the city. 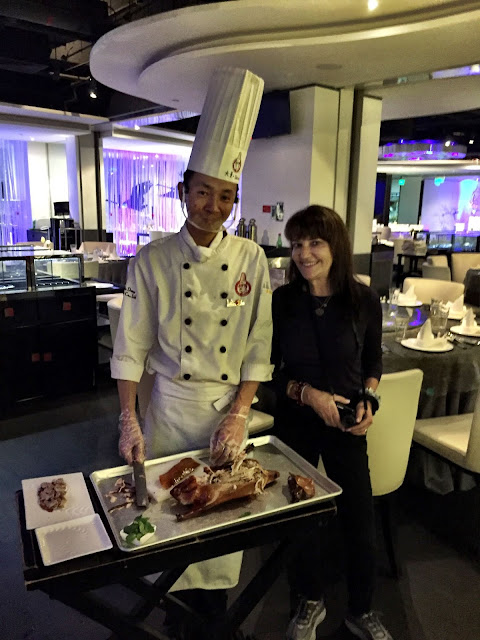 I also experimented with fiery Yunnanese Cuisine at Lost Heaven where I was warned about a different kind of culinary fireworks, the possibility of singeing my tongue. The restaurant is located in a beautiful yard near Tian’an Men Square and is named for Lost Horizon, James Hilton’s story of the timeless, mystical valley of Shangri-La.  Cuisine goes beyond Yunnan here to encompass dishes from Burma (Myanmar) and Tibet, three areas set along the legendary Ancient Tea Horse Trail. Even the cocktails here were spicy – I recommend the Tai Zeed, an elixir of coconut and chilies with a sweet finish. 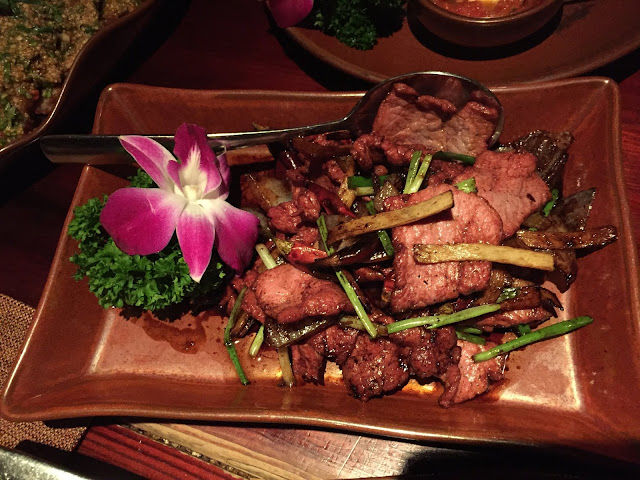 In the old part of the city, the Hutong (alley) and Shichahai (Ten Temple Lake) area, rickshaws took me under a small protective canopy to a tea house where I learned about black, green and white tea and became a fan of delicate Pu-erh. (Note: tea is very costly here, although very fresh). Nearby in some of the street stands I tried bright-red candied haw berries, a sugary snack sold on a stick like a candy apple but reminiscent of cranberries.

I also meandered among the single-story houses characteristic of the hutongs, where extended families often live in one courtyard compound. A visit to a family with a chance to purchase a calligraphy scroll added to the area's authenticity. My planned trip to the walking street of Quianmen, where old Beijing shops and newer international brands like H&M and Sephora come together -- turned into a quick viewing only, as the weather was too inclement to experience it. The same was true for Silk Street, where I had hoped to shop before dinner. 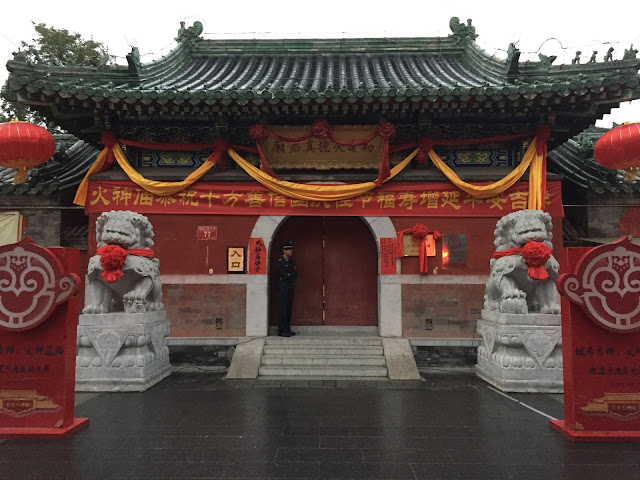 I did see blue sky once. And it was exactly where it should have been… at the Great Wall of China. Standing alone along the steps in the Badaling Section, scanning  endless expanses of walkways, I was awestruck imagining the breadth of the protective wall as well as the labor and genius involved in its creation. As crowded as the monuments of Beijing had been, the Great Wall afforded me a surprising chance to reflect by myself and enjoy some real solitude. I had found a true wonder of the world, and of my visit to Beijing. 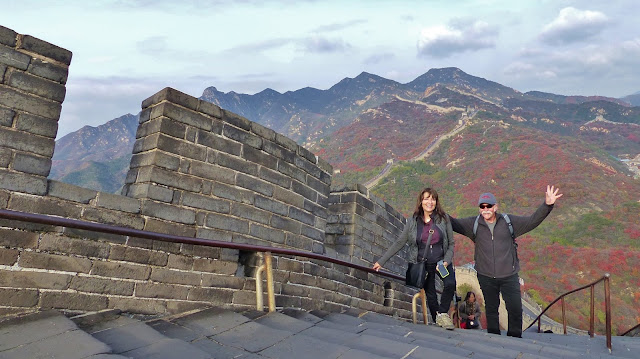 My little Mandarin knowledge didn’t help me much, however in Beijing. Fortunately, though, the city  was filled with enough signs written in both English and Mandarin so I could mostly find my way. That didn’t work, however, when it came to reading the Mandarin-only bus schedules when I was trapped in the rain during one of the frequent downpours. (Apparently, the subway is a bit easier to use with more pervasive English signage). I was grateful for two things that helped me get by: a native guide who spoke English, and the Google Translator app. And I strongly recommend staying at a hotel that has an English-speaking desk staff. Sadly, my hotel in Beijing was lacking in that very-necessary tourist amenity.

The Google app helped me tremendously on my second stop in China, Wenzhou. A sprawling town south of Beijing along the China Sea with industries centered on eyeglasses and shoes, Wenzhou has a lively pedestrian shopping area known as Five Horses (Wuma Street) where familiarization with Mandarin or the local dialect of Wenzhounese comes in handy. With a map and my app at the ready, the English-speaking concierge at my hotel set me off in the direction of the center of town (via taxi), where jade, jewels, home gadgets, and, especially shoes, are high-quality and ridiculously inexpensive.

As I hadn’t had the opportunity to shop in Beijing, it was the shoes in Wenzhou that caught my eye. I somehow managed with my pigeon Mandarin and my iPhone to buy two pairs of ultra-comfy, stylish shoes in my correct size for the equivalent of $50. And all without any English signs or English conversation to help me out. A miracle. Happily, I had a pre-arranged ride waiting to return me to my hotel, sitting by a familiar landmark, Starbucks. 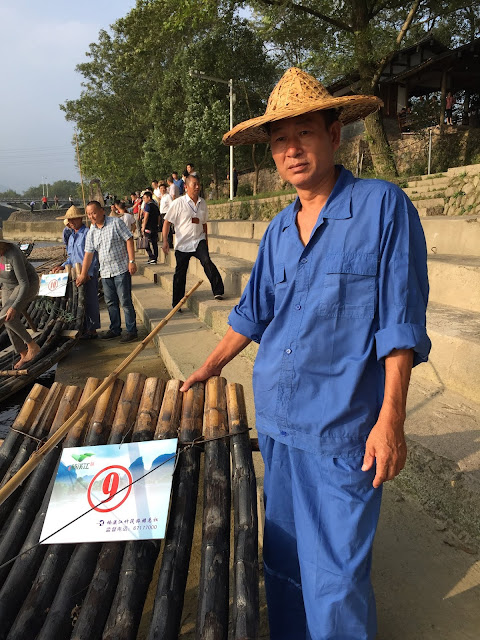 To view Wenzhou from the water, a quick ferry ride to Jianxin Islet can seem like a visit to a different country. Quiet and relatively serene, the islet is the site of the East Pagoda and the West Pagoda, both offering fascinating artifacts from the Tang and North Song dynasties. Wenzhou is a convenient jumping-off point to visit some of the ancient towns and temples in the nearby countryside as well. The Taishun covered bridges are especially beautiful, and Lishui Street with its old houses built around a canal and Furong Village give a glimpse into neighborhoods that are hundreds of years old. Add to this pagodas, temples, hiking trails across rivers in the Dalus Mountain area, and boat rides steered by men wearing traditional straw hats, and you have a multi-faceted view of the area. 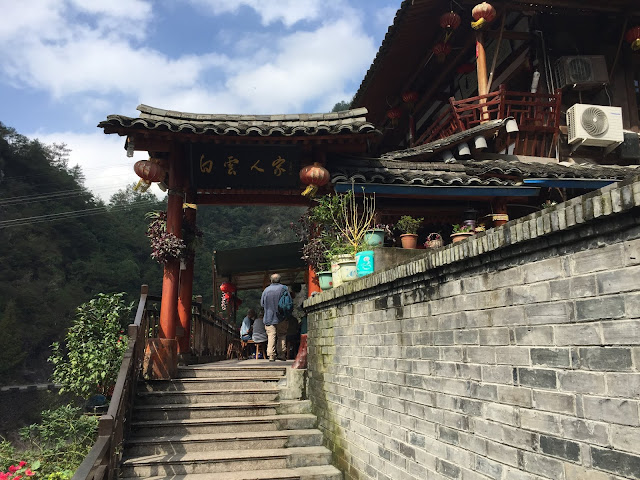 I would strongly suggest staying at the beautiful Shangri-La hotel in Wenzhou as your base. Not only does it offer the welcoming O Cafe restaurant with a delicious smorgasbord of everything Asian from Peking duck to handmade noodles and sushi, but the Chinese culture was also infused throughout the hotel’s luxurious décor and programs including in an early-morning Tai Chi session with outfits provided. My room had a 180 degree view of the city, which was sadly marred by the same white sky that I had seen in Beijing. But when I could see out, in glimpses, I could note the vast expanses of industry, urban change, and remnants of Wenzhou past over the water. 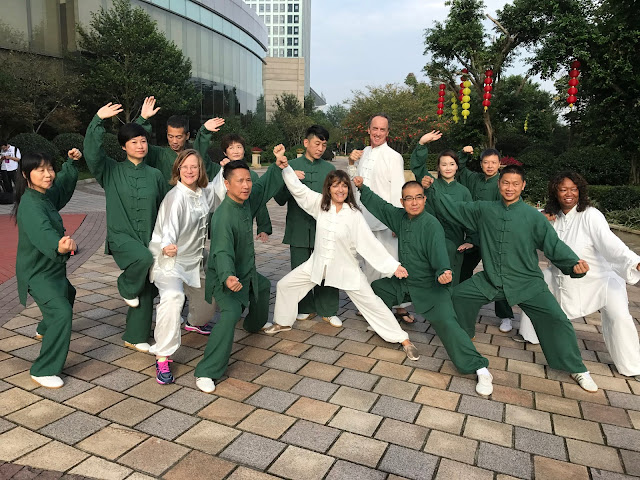 In the end, I suppose knowing how to say hello (ni hao), thank you (xie xie), please (qing) and very good (hen hao) helped me get around this fascinating country. It allowed me to make small connections with the people I met, along with a smile which often says more than any words can. But I definitely recommend hiring a guide.
Email Post
Labels: Beijing China Chinese food DaDong Forbidden City hiking Lost Horizon Mainland China Mandarin Peking Duck Shangri-La hotel The Great Wall Wenzhou Yunnanese