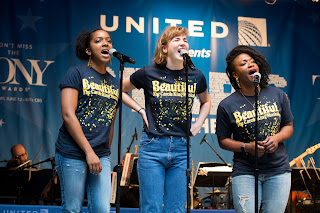 Theater lovers, it’s time for one of my favorite Broadway experiences, STARS IN THE ALLEY®, a showpiece of what’s currently playing on the Great White Way held one week before the Tony Awards® for the 2016-2017 season. Scheduled on Friday, June 2, Stars in the Alley is a celebration of the current Broadway season, and you get to see a sampler of songs and performances from nearly two dozen shows, all FREE. A 12-piece live orchestra accompanies. Given the price of theater tickets, this is a show you don’t want to miss.  #StarsInTheAlley

Actor Tituss Burgess (“Unbreakable Kimmy Schmidt,” “30 Rock,” Guys and Dolls, The Little Mermaid and much more) is the host of this year’s outdoor concert, scheduled rain or shine on June 2, at 1 PM in Shubert Alley, between Broadway and 8th Avenue and 44th and 45th Streets. Come early for the best seats. The show is produced by the Broadway League and sponsored by United Airlines. How many of these shows, scheduled to appear, have you seen? Now’s your chance!


Charlie and the Chocolate Factory


Natasha, Pierre and the Great Comet of 1812


On Your Feet! The Story of Emilio & Gloria Estefan


The Phantom of the Opera


School of Rock the Musical

Plus star appearances from:


The Play That Goes Wrong