You don’t have to be Jewish to love Not that Jewish. In fact you just need to appreciate life, its challenges, and its successes to enjoy Monica Piper’s autobiographical off-Broadway play that’s as funny as it is touching and moving.  If you’re not familiar with some of the vagaries of a Jewish upbringing, Ms. Piper will help you understand.  She even provides a glossary of some of the more common Yiddishisms that she uses throughout the show.  The daughter of a comedian, Monica knew that her true path to success would be to follow in her dad’s footsteps. After a quick turn as an English teacher – a profession that was more acceptable than doing stand-up comedy in the early 70s -- she knew that she needed to follow her heart.  And that meant changing the course of her life when it came to romance, childbearing, family situations, and, of course, her career. 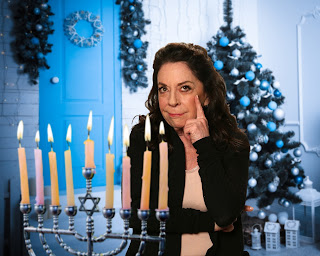 Ms. Piper’s story is truly hilarious. If you don’t find yourself laughing at her amazing repertoire of facial gestures, her facility with verbal tone and word choice, and her relationships with her relatives and paramours, then you’re probably not a human being. You don’t need to be Jewish to understand this play (although it wouldn’t hurt).  But whether you’re from Great Neck or Greenville, this play will tug at your heart strings and ask you the question, “Have I done the right thing?” The answer lies at the center of this play, a revelatory expression of Ms. Piper’s voyage alone as a single mother trying to make a career while tending to her family’s needs.

Not That Jewish plays at New World Stages, 340 West 50th Street, seven times a week, including multiple performances on Shabbat. Its schedule will hopefully go on and on and on and on.
www.telecharge.com. 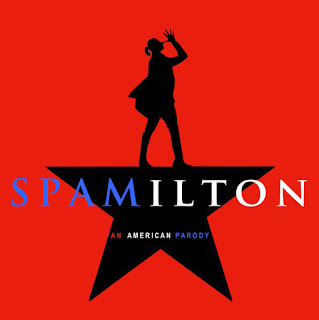 On the other hand, if you haven’t seen Hamilton, you may not appreciate the talent and brilliance of Spamilton, off-Broadway’s’ long-running parody of the Broadway blockbuster. Soon to land on the shore of another coast in the far-reaches of Chicago, concurrent with the arrival of the parent play that it spoofs, Spamilton will keep you laughing throughout its 70-minutes. I definitely wanted to be in the room where it happened and I wanted it to last longer than it did. In this case, the room isn’t the Richard Rodgers Theater on the Great White Way; it’s at the Triad, 158 West 72nd Street, a small cabaret-like setting on the Upper West Side. The two-drink minimum helps set the tone and gets you ready for the non-stop rap, the spot-on character parodies, and even the non-Hamilton but very-much Broadway references scattered throughout.

Did I love this play? Every bit as much as I loved Hamilton. I’ve had the great luck to have seen Hamilton more than once. This is another show that I hope to repeat as well.  Spamilton is brought to you by the genius team of Gerard Alessandrini, the force behind Forbidden Broadway. For anyone who has seen any of the annual renditions of this all-Broadway spoof, the expectation is high for a treatment of Hamilton. The characterizations and vocalizations have to be true to the characters, albeit with their own sense of exaggeration and creativity. The show is like watching a comedic troupe go musical. It’s sheer brilliance.

Spamilton has an open-ended run although tickets are difficult to score. But compared to the real Hamilton on Broadway, this one’s easy. If you haven’t seen the play, at least listen to the Hamilton soundtrack. You shouldn’t miss this brilliant piece of parody theater. http://www.triadnyc.com/buy-tickets

Sadly, one of the most interesting off-Broadway plays has a limited run that is coming to a close. I can only hope that Yours Unfaithfully, a racy piece about open marriage as provocative today as it was when it was written in 1933, will re-surface somewhere else in NYC.  The show, led by Max von Essen, known for his brilliant portrayal of Henri in ‘An American in Paris,” and handily foiled by his scheming wife Elisabeth Grey and his sometimes mistress Mikaela Inquierdo, is terrific.  Its division into three acts is a bit peculiar, with the first act lasting a mere thirty minutes. Yet the scene change mirrors the tone change, as the bawdy tale unfolds. Now ending its run at the Beckett Theatre at Theater Row, Unfaithfully Yours should be given another time to shine at another theater. We can only hope.