I could easily wax poetic about all things London because of last month’s Jubilee excitement and this month’s Olympics, but my obsession with the city really never ended after the events of the Royal Wedding (I still love reading about Kate Middleton in People or about how her image was just photoshopped on the cover of Marie Claire). Considering Buckingham Palace, the jewels at the Tower of London and all other Commonwealth happenings, Britain can make you feel that you’re always about to be a princess like Kate when you’re in London. 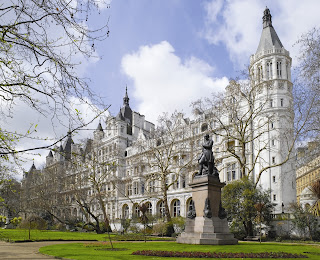 One of my favorite places to stay when I’m pursuing my London fantasy is the Royal Horseguards, the “newest” five-star Victorian hotel in the city. In this big year for London, you’d be remiss if you didn’t stay in a hotel that was awarded AA London Hotel of the Year (it was recently refurbished from top to bottom to add 21st-century conveniences while maintaining its historical pedigree) and indulge in a traditional afternoon tea, done properly with clotted cream and scones as only you’d find across the pond.

While air tickets aren’t cheap this summer thanks to the Olympics, London is worth the visit just for the sake of being in London, and the Royal Horseguards hotel is my choice because of its historic distinctiveness.  Along the banks of the Thames, near to the Embankment, the hotel is a true jewel with spectacular views of the London Eye and a super-convenient location near landmarks like Westminster Abbey, Trafalgar Square, The Houses of Parliament, and Buckingham Palace.  It’s a perfect home base, fit for a visiting princess.

Originally built in 1884 and reminiscent of a Parisian chateau, the Royal Horseguards was divided into apartments at one end and the National Liberal Club at the other. The Club still rests on the first two floors of One Whitehall Place, the hotel’s adjacent event space, and has been used as a key meeting spot for politicians throughout the years. Reeking of history and pedigree, the National Liberal Club was established by four-time Prime Minister William Gladstone as a gentleman’s club, with high-profile members like William Churchill for whom the hotel’s bar was named. There’s also something very James Bond-ish about this building: it once housed the headquarters of the Secret Service during World War I.

The rooms in One Whitehall Place are off-limits unless you’re attending a private function, but other gems within the hotel should not be missed. The Royal Horseguards’ on-site restaurant, One Twenty One Two, is sublime, the recipient of two prestigious AA Rosettes for excellence in British cuisine. The restaurant’s name commemorates the hotel’s former neighbor, Scotland Yard, and its universally famous telephone number Whitehall 1212. Try the tasting menu -- it will give you a sampling of the restaurant’s top dishes including the unforgettable smoked duck and scallops. As I mentioned earlier, if you ignore having high tea in London, you might as well spend a night in the dungeon at the Tower of London praying for a glass of water.  One Twenty One Two makes the tea ritual all the more special with seating on an al fresco terrace with the Thames and the London Eye framing the tiers of finger sandwiches and scones.  As important as the hotel’s historic roots, the restaurant’s tea service won the Tea Guild Award of Excellence for 2012.

You can “go for the gold” this summer with the Royal Horseguards’ luxurious “Glamour in the Tower” package.  Your iPhone camera will be working overtime from your accommodations in the Tower suite, with its 270 degree views of the Thames and the London skyline.  The price for this prize? A mere £1,500 per room per night based on double occupancy, breakfast included.

If this type of luxury isn’t your cup of tea, through September 9, the hotel is celebrating London’s selection as the 2012 summer Olympics city with rates up to 50% off (including VAT but excluding July 27-August 12). The summer special may not be available during the actual dates of the Olympics (no surprise, really), but it’s still a great choice during any of the season’s other wonderful events.  Plan ahead to enjoy the London Festival 2012 with more than 12,000 arts and cultural events all summer long.

Reservations can be made online. Ask for a room with a river view for those stellar views of the London Eye.