Alexander McQueen at the Metropolitan Museum of Art 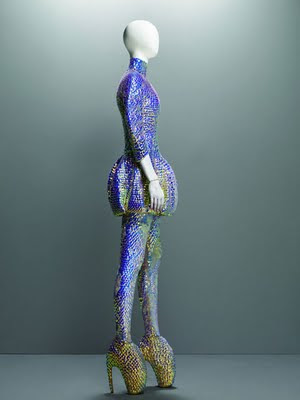 The Metropolian Museum of Art wants to be sure that we don't forget what happened on February 11, 2010: the silencing of the fashion world by the death of designer Alexander McQueen. McQueen’s influence began in the early 90’s and ranged from exotic tailoring patterns to evocative and raw fashion shows. He was one of the first to present the industry with a true British embodiment of culture and style. He pushed boundaries and made a few fashion faux pas; quite different from his earlier work in the studio of Givenchy. In the end, he created a worldwide empire of design that would continue to empower women long after his death.

Through August 7, the Costume Institute and the Metropolitan Museum of Art is showcasing McQueen’s legacy in the ‘Savage Beauty’ exhibition. Located in the Iris and B. Gerald Cantor Exhibition Hall, second floor, entrance is free with Museum admission and if you’re a Met member you’ll be able to skip the extraordinarily long lines for this popular exhibit. Membership has other privileges, too: you can bring four friends along with you – an amazing feat. The exhibit is open on Mondays when the rest of the museum is closed, from 9:30am- 2:30pm, for visitors willing to purchase a $50 ticket.

If you’re assuming this exhibit to be a typical and exclusive fashion show presentation of waif-like models and obscure fashion messages, you’re very wrong. The exhibit is more art than fashion, more history than modern propaganda, and more interesting to look at than the average designer dress walking down the Red Carpet on Oscar night. It’s also dark and quite disturbing.

The title, ‘Savage Beauty’, is meant to represent the contrasting opposites in McQueen’s work, and the various themes that he presented the public throughout his career. His most revisited subjects include: polarized opposites, life versus death, lightness and darkness, predator versus prey, and man versus machine. The exhibition focuses on McQueen’s most prized collections and is broken up into six rooms of designs- organized by “Romantic” interpretations of historicism, primitivism, exoticism, naturalism, the gothic and Darwinism. Much of McQueen’s work was and still remains highly controversial regarding what he was assumed to be representing. This in itself is what makes his work so captivating. He has the ability to tell a story through clothing -- not an easy task when it comes to fashion design.

There are approximately a hundred ensembles and seventy accessories from the House of McQueen, including some of his most famous designs: the “bumster” trouser, the kimono jacket, and the three-point origami coat. The exhibition exemplifies McQueen’s promotion of expression of culture, politics and identity.

A great way to explore the Metropolitan Museum of Art with a twist, this is a one-of-a-kind exhibit that attracts more than the fashion and design crowd. It’s a fabulous opportunity to explore modern culture through the eyes of a British mastermind, and a great way to get a good dose of fashion mixed in with history, art, a study of humanity and beautiful craftsmanship.

Be prepared for a very “dark” experience. It certainly gives insight into why this fashion genius committed suicide.

“You’ve got to know the rules to break them. That is what I’m here for, to demolish the rules but to keep the tradition.”