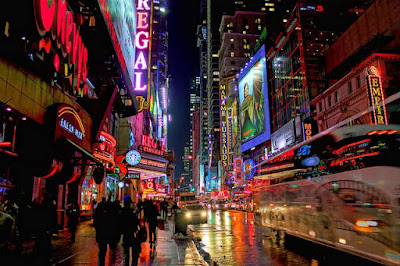 Give your regards to Broadway (think “Little Johnny Jones”) and take advantage of special deals at several theatres and restaurants through February.

NYC’s 20at20 is going on now through Sunday. Starting 20 minutes before showtime, just walk up to the box office and say “20at20” for $20 tickets to 32 of New York’s best off-Broadway shows. Among those offered are personal favorites Love, Loss and What I Wore and Stomp. Get a complimentary dinner voucher for two at Serafina Restaurant (fabulous Italian) or Junior’s deli after seeing seven of the 20at20 shows.

Another deal to rave about is Broadway Week’s Two-for-One ticket special, now through February 10. Catch up on 17 Broadway hits including musicals such as “Memphis,” “Jersey Boys,” “The Lion King” and “Mamma Mia!” and comedies like Colin Quinn’s “Long Story Short.”

Matching the number of shows in this office, 17 bars and restaurants all over Manhattan are offering two-for-one drink specials after 9pm as a special encore for Broadway Week show-goers through February 13 with their On the House program. Go from classy with Bemelmans Bar at the Carlyle Hotel to jazzy at Cleopatra’s Needle to just plain fun at Rosa Mexicano in Union Square and enjoy fabulous drinks like frozen pomegranate margaritas, potent martinis, or fine wines by the glass.

More information for all programs can be found on NYC Go's informative Web site.