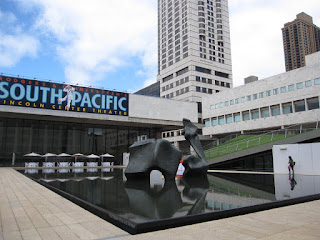 Lincoln Center has a new look and a new outdoors. Check out the LED messages that flash off and on as you climb the new gradually sloping Grand Stair from Columbus Avenue towards the fountain. That’s the first indicator that something 21st century has transpired here. And, BTW, the Revson Fountain is even more amazing than it used to be. With the nozzles now placed at ground level, rather than in its former birthday-cake configuration, the water shoots up gloriously to varying heights with varying designs. There’s a reason why everyone heads directly to it. While we were wondering why there were no seats around it to admire this amazing view, we spotted new chairs just around the bend in the completely redesigned North Campus. We were later told that every attempt was taken to maintain the original design integrity of the main plaza of Lincoln Center. Hence, no chairs. We can live with that because what’s on the North Plaza more than makes up for the main plaza's shortcomings (in our opinion). In addition to seats in a now tree-lined and shaded area next to the reflecting pool, there is the fabulous new Illumination Lawn overlooking the Vivian Beaumont Theater, an ascending grassy park space and the perfect spot for picnicking, people watching and lounging. (And, it's actually the roof of the in-development "Restaurant" which will open in time for Fashion Week in September).

There are more wonderful places to hang out, too. Walk over to the corner of 62nd Street and Columbus, previously an uninteresting corner, the spot has been transformed into the Charles B. Benenson Grove, the beginnings of an "urban forest" with trees carefully chosen to "chatter" and create a white noise block against the street traffic, with inviting seating.... yet another place to lounge and reflect.

The redesign of Lincoln Center by the architectural firm Diller Scofidio + Renfro had an objective of bringing people into the public spaces of Lincoln Center, both indoors and outdoors. People, with or without event tickets, are invited to spend more time soaking up the cultural richesse of Lincoln Center (which finally has a sign, albeit discreet, to tell you where you are), enjoying the buildings and settings which are so different from everywhere else in Manhattan, and simply observing.

On Friday May 21, everyone is invited to an opening party from 12- 3 to celebrate the new public spaces. Come enjoy the beautiful outdoors, free lemonade and free gelato. You might want to make a quick stop first across the street at the Atrium Ticket Office to see whether anything’s being offered at discount that night so you can grab some choice seats. If not, don't fret. Free tickets for Summer at Lincoln Center events will be given away every hour at the opening party.