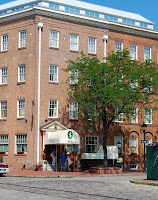 I guess I visited Baltimore a bit too early this summer when I focused on baseball for my "Fancations" story. I stayed at the lovely Admiral Fell Inn, a member of Historic Hotels of America, and communed with the spirit of Edgar Allan Poe at Fells Point’s The Horse You Came In On Saloon next door, reputed to be one of his last living haunts. But I missed a ton of events happening this fall to commemorate the bicentennial milestone. Don’t wait until Halloween to be spooked! Get thee to Baltimore in a heartbeat so you can check out these celebratory (?) events sponsored by the City of Baltimore:

October 7th – Date of Poe’s Death – VIEWING OF POE’S BODY
Poe House and Museum
203 North Amity Street
Private viewing, family only - 9am until noon
Public viewing, noon to 11pm
This will be the public’s only opportunity to view Poe’s body before internment alongside his grandfather, grandmother and brother Henry in Westminster Graveyard on Sunday, October 11.

October 8th – CANDLELIGHT VIGIL AT THE POE MONUMENT
Westminster Graveyard
Midnight to 7am
Beginning at Midnight, join hundreds of people at the Poe Monument as a candlelight vigil is held remembering Poe. During timed intervals, people will be allowed to present their own tribute to Poe in verse, song or a simple spoken tribute. Actors will be invited to present his poems and stories during the vigil. WCBM will air live from the Poe Grave with American writer and poet Walt Whitman. Gris Grimly, artist and storyteller, will also attend the funeral.

October 11th – POE’S FUNERAL
Westminster Hall
12:30pm and 4:30pm
An antique horse-drawn funeral hearse will bring Poe’s body from his Amity Street home to the Westminster Hall for burial services. A drum and fife marching unit will lead the procession. The funeral services will include choral music and a number of speakers including people who knew Poe, his business associates, relatives, writers who were inspired by Poe including Sir Arthur Conan Doyle, Charles Baudelaire, Jules Verne, Alfred Hitchcock, as well as “living people.” Famed actor John Astin will officiate over the services. Monte Maxwell, organist for the US Naval Academy Chapel, will play Westminster’s 1889 Johnson pipe organ. Click here for updates.